So after Sunday’s match, tonight’s training was a bit quieter than normal 😀
First things first, had to chop off that bit of the cheekpiece that was constantly catching my nostril when I dropped my head onto the cheekpiece. The cheekpiece is made of blackwood, so it wasn’t really a job for a saw, so out came the dremel and after a few minutes cutting and then a little bit of polishing, I had a nicely unsquared corner: 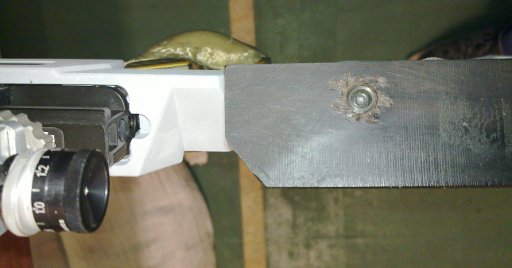 And the dremel meant that the cut was nice and clean and still sharp: 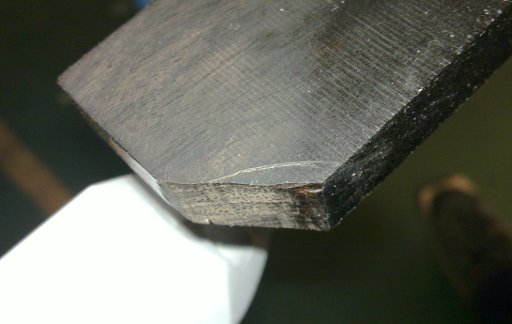 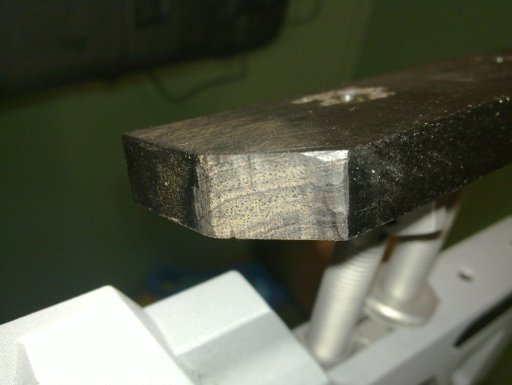 Lovely wood, that african blackwood, fabulously tight train, but a pain in the posterior to work with without the right tools.

Once the cheekpiece was sorted, it was on to dry-firing, just to test it out and to practice the shot routine (the cheekpiece is now far more comfortable while still being sharp enough to leave a mark on your face two days after a match). After about ten minutes of this, Matt arrived, and watched for another few minutes, and then after talking about how the weekend went, he make a pretty substantial change to the position:

It’s quite different from what went before:

Which, as you can see, had the right foot turned out and back behind the position of the left foot – and what you can’t see is that the left foot was developing a habit of turning out as well during shooting. The new position felt very wierd – the inner position feels enormously different with muscle tensions in different places, but it did lead to an improvement in the stance and there were moments of stillness from it. Matt thinks it’ll need tweaking yet, to take pressure of the right foot (the outer half of which went numb during shooting), but it’ll do for now until the jacket is replaced.

I think the main hassle I have now though isn’t really technical – the position works well to shoot a ten; it’s duplicating the position that’s the problem, and that’s something I have to solve through time on the range, dry-firing over and over again. Last night was two hours on the range without a shot fired. I think there will be more days like that in the next while, until I learn the shot routine enough to trust it again (say, 200-300 times to get started with).