So after the submission I sent in to the Joint Committee about the proposed changes to the Firearms Acts, I got invited to appear before them to discuss the submission in person. And the agenda just came out today on the Oireachtas website:

(Funny side note, Dr. Albert Jordan is the guy who first taught me how to shoot twenty-odd years ago. Small world).

Would have mentioned all this earlier, but I had to prepare an opening statement with a short deadline (of about forty hours, including the time lost by not seeing the invite, the will-I-won’t-I decision making time and trying to talk to a few of the other groups about what they were covering to avoid duplicating effort, and , you know, sleeping, eating, working and toddler-related stuff). So, sortof a rush. And apparently the powerpoint system in there doesn’t work so well, so my original plan to just show this image wasn’t a runner… 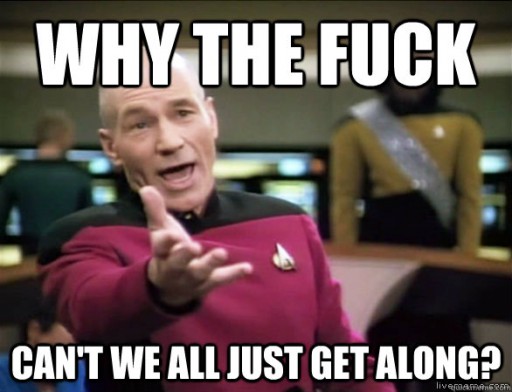 Oh well. It would have been memorable. (And given them a break from the 200+ submissions they’ve received).

So here’s my actual opening statement (and here’s the pdf in case the formatting is mangled by the whole document->blog post conversion again):

Appearance before the Joint Committee on Justice, Defence and Equality

on the review of firearms licencing.

I’d like to thank the Committee for their invitation to speak here today. It’s good to see those being impacted upon directly by the proposed changes in the working group’s review document are being afforded this opportunity. You’ve read my submission which contains more detailed notes, and I’m happy to answer any questions on that, but I wanted to open by trying to explain what we want from the law, why we want it and why you want it too.

As I said in my submission, what I, and many other shooters, would wish to see in the Firearms Act is:

A clear and unambiguous set of rules regarding firearms licencing which are readily readable by everyone and which are enforced equally in all Garda districts.

In my submission I’ve gone into some detail on some of the technical problems that prevent that being the case at present, such as the layered nature of the Firearms Act (and the other Acts that make up the body of firearms law in Ireland), and others will no doubt present other aspects to this problem and I expect that the national governing bodies will present the details of their respective sports; but there is a fundamental perspective to this problem which I suspect may not be obvious to those outside of the shooting community and which would assist the Committee in understanding our viewpoint.

In our sport, everything is measurable. The size, shape and weight of our firearms, the calibre of the rounds used, the weight and thickness and tailoring of the clothing used, the distance and shape and nature of the targets, our scores and where our shots land and how they were fired and so on. Our sports coaching is built on this fact; our rulebooks are based on it; and it permeates every single aspect of what we do and the culture that surrounds that. We’re in a sport unique for its brutal honesty. You aim the shotgun, rifle or pistol, and you pull the trigger. Then either you hit the target or you don’t. And everyone sees. You can’t hide from it. You can’t say some judge gave you low marks for unsporting reasons. You can’t say that you had a great game but your teammates let you down. You can’t say that the referee was blind. You can’t say that anything, other than your own skill, was responsible for the good or bad score from that shot. It’s entirely down to you. That’s the beauty of this sport, it’s a fundamental part of the attraction to it, and to me it’s one of the highest ideals of the sport. It’s why I love it – it’s why, after twenty years, I still enjoy every moment on the range as much as I did on that first day when Dr.Jordan walked up to me and said “Okay, so this is a rifle”. To answer a question that was asked repeatedly in the December meeting, this is why someone would want to do this. There is nothing else like it in sport and very little like it in life.

And it has the side effect that we are used to clear, objective rules which make judgements based on physical features or events that can be measured in the real world with instruments and so the judgements are mathematical in their objectivity. For example, an ISSF air rifle must weigh 5.5 kilogrammes or less according to the rulebook. At the start of a competition, my rifle is weighed and if the scales say 5.5, I can enter the competition and if they say 5.6, I cannot. The judge running Equipment Control does not have to make a subjective decision: he or she just reads the scale. The rule is clear and easy to read and everyone can look at a single rulebook and see what that rule is, and competitors can check that they pass that rule ahead of time using the same equipment the judge will use and be confident that they will pass on the day.

In contrast to this, the Firearms Act is frustratingly complex to read (and there is no single rulebook for everyone to look at), and the judgements it calls for are highly subjective, and how they are reached is opaque to the applicant; and the decisions which affect us vary from issuing officer to issuing officer so what is allowed and what isn’t under the Act is often a function of your address, with no way to tell ahead of time what that might be.

And I’m not even touching on the problem of those parts of Irish firearms law that are plainly daft.

This might sound like a niche problem affecting a small number of sportspeople in a minority sport, but it is not. It has an affect on the public in general. We have seen hundreds of District, High and Supreme Court cases over the last decade or so, many of which have as a fundamental cause a Firearms Act that is effectively unreadable to the average person. These cases not only represent enormous amounts of time and money and stress to shooters – the equivalent of building and equipping several badly-needed national-level shooting ranges – but they also represent thousands of Garda manhours and millions of euros of public money, most of which could have been saved if we had a clear and easy to read Firearms Act whose rules were the same everywhere. And we only have a certain number of Garda manhours and they are badly needed elsewhere, not arguing in a court over fiddly points of badly written law with people who frankly, would rather be on the range taking part in our sport.

Myself, I have spent years involved in the legislative side of our sport. And bluntly, I regard that as time wasted and sporting opportunities lost. We had no choice but to be involved; even from the first days our sports were at risk of being crippled purely by oversights or misunderstandings in the drafting process; but there are far better uses in our sports for our resources. If we had clear, universal rules in the Act, that would be possible.

The only way I know of to get to that happy scenario from where we are now is, as I recommended in my submission, to undertake a restatement of the Firearms Act. Once we have the Act written clearly in one place, we can consider correcting some of its more obvious anomalies; but until then if we apply more patches to an already over-patched body of law, we will simply be confusing the situation even more than it currently is and we will in all likelihood create more problems than we solve. If we go down that road, we will be right back here again in a few years, with even more Garda manhours and public money and sporting resources lost as a result.

And in the meantime, the average voter is even more in the dark about what protections the law provides them and given how the media portray problems like gun crime, this can be nothing but a source of fear. Good law should reassure people by showing that a potential risk is understood and a fair system exists to govern it. The Firearms Act at present fails woefully in this task because almost nobody really knows what is in it.

I would urge the Committee therefore to reject the review’s proposals in their current form; to recommend that the Firearms Act be restated to give us a known baseline to work from; and that the changes whose necessity will have by then become clear and obvious to everyone, be worked on by all the stakeholders together, to produce a clear, readable, boringly consistent law which everybody understands and can follow. The first Firearms Act stood unamended for almost forty years because it had those characteristics – so while it is a privilege to appear before the Committee today, I would hope that its decision would be one that means we don’t meet again until at least 2055!