A more relaxed wakeup this morning – still freezing cold, but don’t have to get up quite so early as yesterday. Breakfast, then head off around noon to get to the range. Plan is simple:

I’m shattered though. It’s like the last day of Intershoot all over again. My aiming feels good, and the triggering feels smooth, but my legs just aren’t cooperating to give me a solid platform or a decent hold. My feet feel like I’m standing in a small pool of sweat in my boots, they feel like there’s no padding and they’re being pushed through the socks (the socks were an experiment all this week, I traded in my normal base layer socks for a pair of underarmour compression socks to try to counter the numbness I was getting in my feet around the 40-60 shot range in a match: 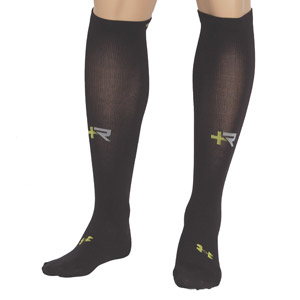 And no, this wasn’t Rob Bryden’s idea 😀 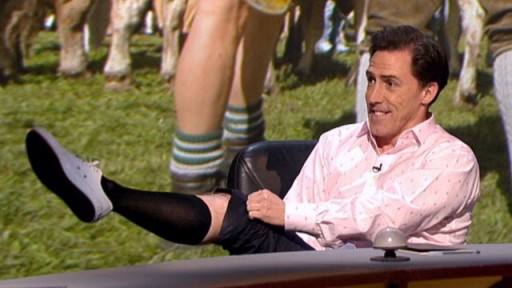 The experiment’s worked quite well at preventing numbness – I didn’t have a single problem with numb feet at any time, but they don’t give enough padding for the sole of the foot, so I might need to wear the base layer socks under the compression socks too. However, that won’t help the knees 😀 My knee was gone again by the end of the match – sore, unable to bend without pain, feeling like I’d pulled a hamstring.

I go through 23 shots with some difficulty (95 then 92 because of drift) but shot 24 was a seven, and mentally I gave up, I put down the rifle and walked away for a few minutes to get my head together. I came to the conclusion at that stage that the match was pretty much a lost cause in terms of a high score; and then I thought why not use the remainder of the match to test something – yesterday’s performance met the performance goals for the trip, and the match was pretty much shot, so why not at least learn something?

So I got back to the line and into position, and proceeded to try to shoot as fast as I could. Same shot routine as before, but take the shot as soon as it presents itself; no holding for any more than one to two seconds at most. The results were quite interesting. 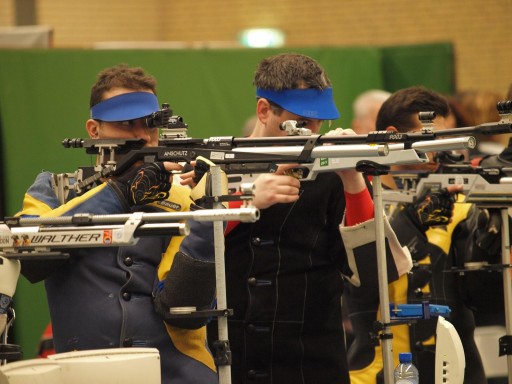 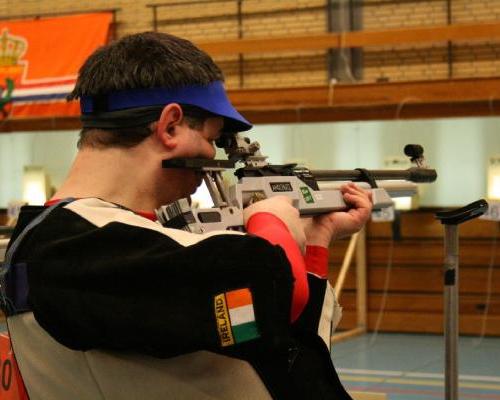 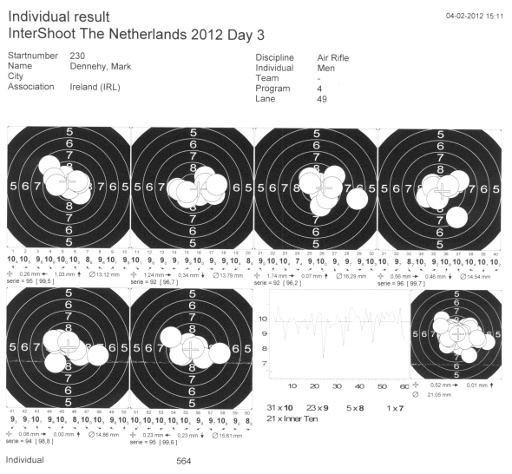 There was a whanger of a flier in string four, but aside from that, the standard of shooting was higher over the next few strings. Looking especially at the decimal scores, slow shooting resulted in 99.5, 96.7; shooting fast gave 99.7, 98.8 and 99.6 despite my being more physically drained than the first two strings. It’s nothing that Matt and Geoff haven’t been telling me for a looooong time, but it’s so counter-intuitive that I never really could trust myself to do it; I was hoping that doing it here would give me sufficient confidence to do it in competition more often 😀

After the match, I got my name stitched on my Ireland team jacket (they had a chap there doing embroidery for Intershoot T-shirts and the like), and looked over the new Walther LG400 rifle (I’ve been worried for a while now that if any part of my rifle broke at a match, there’d be no way to get spare parts; Matt thinks I might change over rifles during my time away from the circuit). There aren’t many rifles I’d like; the LG400 is one of them: 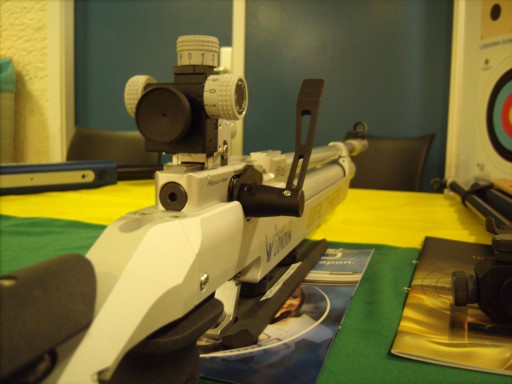 We then got something to eat, watched and cheered on Ray in the finals, then packed our kit, hauled it back to the chalet, got changed and went out for a final team dinner in the local diner (lovely steak). After that, we walked back, packed away most of our kit for the morning and got some sleep. The next morning we had an early wakeup to take a team photo and bid farewell to Peter as he headed off; then we finished packing, cleaned down the chalet and hauled back to the airport by minivan.

Check-in at the KLM desk in Schipol took the guts of two hours to do. KL-bloody-M. And they tried to charge me excess baggage of €180 for the rifle instead of the €40 sports baggage charge – I pointed out that our tickets were booked via Aer Lingus and had the assistant call a colleague who sorted it out. It got to the point where the other airport staff were getting a bit narky with the girl on the checkin desk. Eventually we got through, got through security, and headed to the gate. And then Paul and I and Kealan took a few minutes to raid the duty-free for some gifts for home (married men can’t come home without gifts 😀 ). We barely made it back to gate in time! After that, the remainder of the trip back was incident-free and normal, we said our goodbyes in the airport and that was the end of the trip.

Overall the total is two new Irish records, five shooters hit the MQS scores (and the sixth missed it by a point and set an Irish record in the process), three competition personal bests, two international debuts, and a team medal. That was a good trip 🙂

PS. We got some nice coverage on TheScore.ie and the Evening Herald and there’s also an NTSA writeup.