Tuesday was not a great day for my shooting. I was tired and my head wouldn’t settle, and nothing seemed to work right. Still, on with the training, even through the hold wasn’t great (on friday, it’d sit in the nine ring on the rika trace; tuesday, it would maybe hold inside the seven ring.

The exercise was the same as before, shot routine as normal, hold on target, then close eyes, count off a second or so, and then fire. The idea is that if my NPA (Natural Point of Aim for the non-shooters, it’s where the rifle would point if you didn’t deliberately or subconciously try to point it somewhere, and it’s where the aim will be the most stable – we want that in the centre of the target if possible, but because you can be subconciously moving the rifle to the target, it can be hard to spot problems here) is off, then the rifle will head towards the NPA as soon as I close my eyes and the shot and the trace will show me where it’s headed for. Fired ten reasonable shots this way: 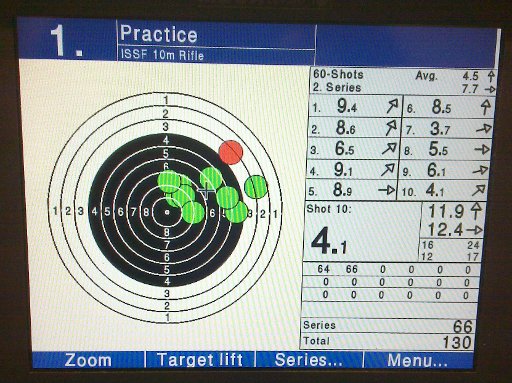 And the traces show the same tale:

Superimposing them all makes it a (bit) clearer (remember, the electronic target and the electronic trainer aren’t perfectly in sync (and in theory never can be), so the points of impact vary a bit, so it’s the shape of the traces you’re looking at: 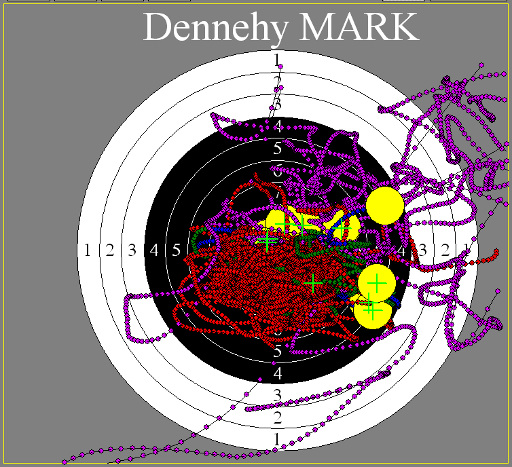 So in each case, as you can see, the rifle heads away from the hold area as soon as I close my eyes, and the shot never lands in the hold area at all. That’s more than a hinky triggering, that’s a hold error right there, and it’s what Matt was talking about (how he could see it, I don’t know – this is why the NCTC think he’s a genius).

But this isn’t the end of the exercise. As you can tell, this was an off day for me even without this. So the results aren’t perfect. Compare the X/Y graphs from tuesday: 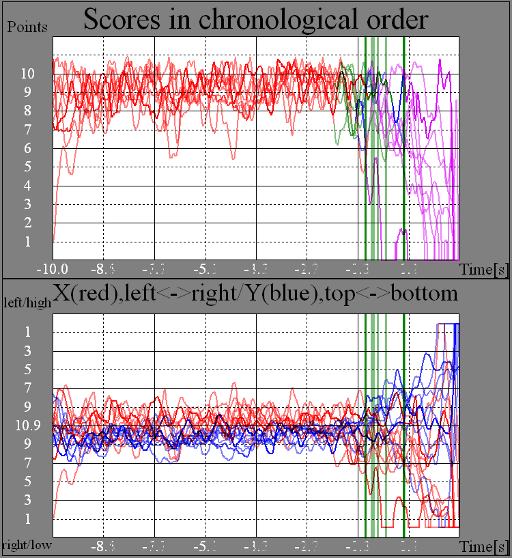 to those from Friday: 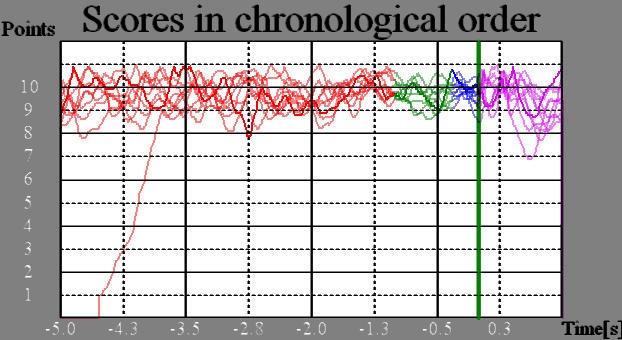 You can tell just by looking at how Friday’s graph is so much less noisy that the hold was better that day.

So, not a good day. But the upside is, the problem was more pronounced because of that. Being too unfocussed mentally and too tired physically to cheat the rifle into the ten ring with subconcious muscling means that I could see the problem free and clear.

But what does it look like when I’m not having an off day? And was that off day making a mountain out of a molehill? The data isn’t really exhaustive. And you can’t make a change based on one set of data like this. People do – there are Irish shooters who’ll shoot nine 10s and then a nine, and who’ll haul out the hex key to tweak something on the rifle because of the nine. Changing the rifle, or changing the position or indeed anything about the shot routine, however, isn’t something so small and trivial. If you change even a small thing, it can take hundreds of shots (a) to get the change right and be able to trust it in a match, and (b) to know if the change actually fixed the problem in the first place. So you have to be really conservative and not fix something until you know it’s a problem with the setup instead of faulty execution (of course, if it is a problem with the setup, you then often have to switch gears and be completely unorthodox in finding a solution! 😀 ).

So today, I do this all again, and hopefully it won’t be an off day and my hold will be better this time, and if the results are the same, then it’s time (with my coaches) to try to find a solution…