Over the last few weeks, I’ve had the Lanny Bassham mental management CDs playing in the car while driving about, in particular the FIRST CD, and one of the big points they make is on how shooters tend to become outcome-oriented in matches with great ease and how it utterly stuffs them up when they do.

Or, as Matt and Geoff have been putting it for the past ten years to a wealth of people who never listened properly (including me), The target is 10 meters away, there’s nothing you can do about that; all you can fix is what’s happening right here at the firing line. Or, more succintly, shut up and dry-fire. 😀

The training last thursday proved that right in a big way for me. The idea was to get some video footage of my head position because one of the things I noted during the Nationals was that my sight picture was sometimes inconsistent – sometimes my head was closer to the rearsight than other times, and that’s been a problem in the past.

Matt, however, was watching what I was doing and after a rather dismal warmup: 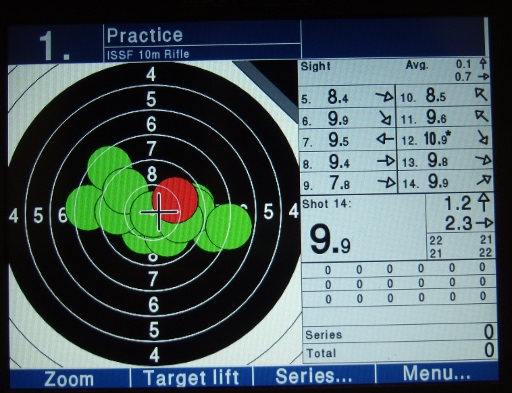 and a so-so group of shots complete with bad fliers: 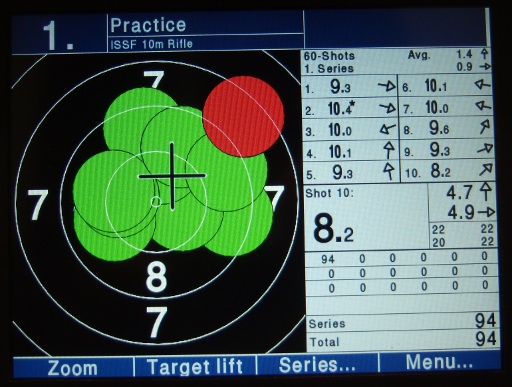 Matt turned the screen away so neither of us could see it, and then had me call the shots (and called them himself based on what he could see, writing down our calls as we went) for a ten-shot string: 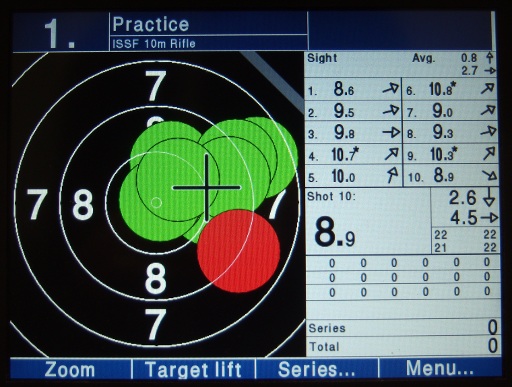 One of those shots, we both agreed was off. One I said was on the margin and Matt thought was off. Both of those weren’t great shots, by comparison. But all the others were good, with solid holds, rapid progression through the shot routine and aim times of under five seconds. A year ago, I couldn’t manage that for one shot. The process has much improved.

Now, ignoring both the irony of looking at the outcome in a post on how that’s a bad idea, and also ignoring a flier on the last shot (that lovely 8.9 in red that neither Matt nor myself thought was shot well), picture that central group if my sights had been set on target correctly – the group covers just under four ring diameters. Centered, that means that all the shots would have landed within the 8 ring, which would translate to a score somewhere around 97-98ex100 (or about the 580 level in a full match). That’s shot without a stable jacket (in fact one that both fights me and gives me no support in position) and an old pair of trousers.

So, two things are now evident:

Specifically, I’m seeing the score come in and I’m then thinking “What do I need to fix to shoot a ten on the next shot?” instead of thinking instead “The next step in the shot routine is X and I need to be watching for Y before moving on past that step…”. When I couldn’t see where the shots were landing, my shot routine got better, my mental focus got better, and the end results got much better.

What this means for training is fairly straightforward – finally doing all the dry-firing and wall-watching that Geoff and Matt have been advocating for years, but this time actually knowing why in my gut.

How I work this into my shooting a match, will be something we’ll have to work on…