Up at a reasonable 0700 or so this morning. Sweet brass monkey eunuchs but it’s cold. Somewhere between -8C and -10C. Peter’s diesel estate wouldn’t start first time yesterday for the first time since he’s had it because of the temperature, and today it’s colder. And I don’t like the look of that fairly large cloudbank we can see off in the eastern sky either. We do *not* want hail today thanks.

Down for breakfast (Rolled oats, water, milk and five minutes on the hob for excellent porridge! Breakfast of champions! Three minutes more than for that microwaved gunk, but it’s more than worth it!), and a cup of coffee, we pack the few things we’re carrying with us — my netbook and shooting diary (got it printed up as a book and it turned out nicely, we must see if we can sell a few of them to raise money for WTSC‘s new range fund), fruit and water for all of us, and Paul’s rifle and stand — and we head off for the range. It’s a brisk mile of a walk, interrupted only to scare the wits out of the chaparone for the Welsh junior squad by trying to be helpful and offer directions to the range without realising that they might have odd notions about strange Irish chaps wearing low-pulled caps, sunglasses against the glare and wind, and wearing neck gaiters over faces (did I mention it was cold?) 😀 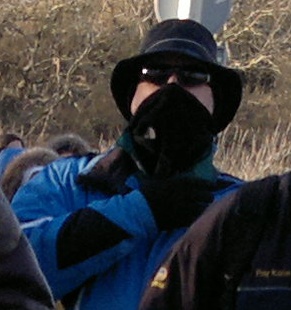 Oh well, it was character-building for them 😀

Anyway, on to the range, and we got out our kit and got our heads into the game. Aisling was still shooting, having had the ungodly-hour start this morning, so we watched her for a while, but she seemed to be coping well so we left Kealan to keep watch and went to get ready. The plan from the diary was again, quite simple:

The sight picture was the lesson learnt from yesterday; I figured if I could watch it for this match as my main focus, I’d do reasonably well. My head was in the game, at least for most of the match; though I confess I did check the score near the end. Stupid, stupid, stupid…

Starters went off well, my zero looked okay and I spent a dozen or so shots just getting into the rythym and watching the sight picture. The backdrop was different today, we were back up on the firing points we’d trained on on the first day, so that was familiar. We were also smack in the middle of the webcam’s field of vision but alas, nobody thought to snag a photo of us 😀 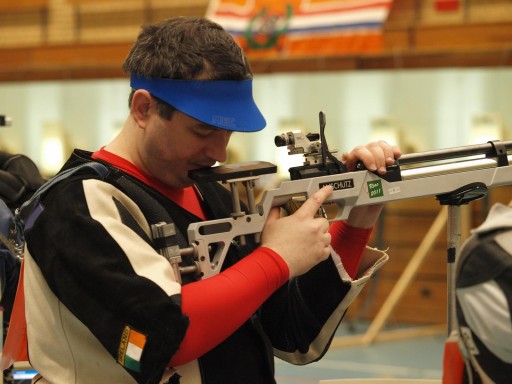 Some folk commented about the shortened sleeves of the jacket here btw (it’s hard not to notice them) – the truth is that the only problem was that I didn’t cut enough off the right arm. I should have taken another two inches off of it. The arm doesn’t give you any support in standing – all it gives you there is a shoulder pad to put the rifle’s buttplate on. The rest of the arm is only there for those who shoot three positions – the sleeve’s needed for prone and useful for kneeling. Honestly, I might well just hack off the arm on the new Kustermann jacket too. But if you do hack it off, do so well above the elbow – otherwise when you bend you arm to reach the pistol grip, you may hit the material of the jacket above the elbow with your forearm, bowing it outwards and creating unnecessary wrinkles which can muck up your buttplate positioning. The left arm does need the sleeve, for the arm-side contact point, but that one got cut too, just because the arm was too long – it was down to my thumbs 😀

The sight picture worked really well – I’d mount the rifle as normal, watch the target while settling (looking over the rearsight, which is very easy with the MEC Free rearsight), check the foresight against the background to be sure it’s in roughly the right place and isn’t swinging about all over the place, then lowered my head down to the cheekpiece. But while lowering my head, I’d look through the rearsight for a final pre-aiming view, at which point the foresight tunnel would appear to be just touching the top of the inside of the rearsight. That let me check my horizontal centering, and then lower my head gently while fully exhaling to the cheekpiece to center vertically. Triggering followed naturally on from there. 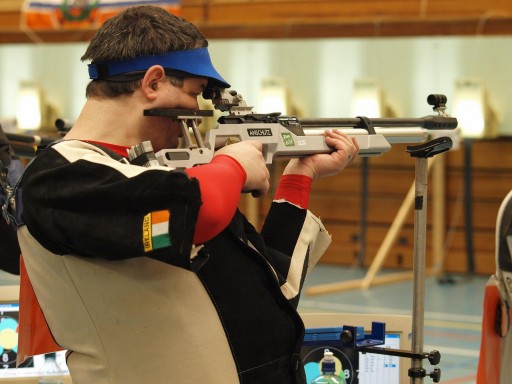 Of course, that didn’t settle down until the middle of the first string, so there were two wild eights in there (well centered, just high because the cheek pressure on the cheekpiece was wrong)… but there was only one more in the next 55 shots, which was far, far better than the last few international matches. The series scores weren’t the highest I’ve ever shot, but they were consistent: 94, 95, 97, a slip down to 93 thanks to that third eight, then two consistent 96s to finish. And of course, I did check the score in the last string. Stupid, stupid, stupid…

Still, turned out well enough – a new International PB of 571 and my first international MQS 🙂 In fact, it’s a new competition PB overall – I’ve shot 574 at home in UCD in front of the NTSA before coming out to Intershoot, but not during an official match. 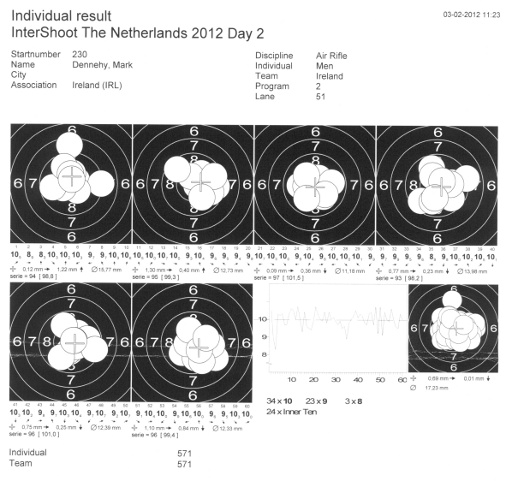 I was rather happy with that, in fact, and went off to decompress (my feet felt awful, like someone had put them in a vice and tried to squash them flat) and get some food (I was starving by the end), log into facebook and skype home and find a cup of coffee.  Which is why, when they called out the team medals and I realised we were in contention, I had to sprint down from the spectators gallery. But I wasn’t caught as off-guard as Ray was, because he’d just finished shooting in his second finals of the week (Ray made the finals on all three days) and was just changing out of his shooting kit into his tracksuit when they called us up for third place (that’s why Ray is in his socks in the photos 🙂 ).

Oh yeah, third place, did I mention that? International medal for Ireland. You know, just another thursday… 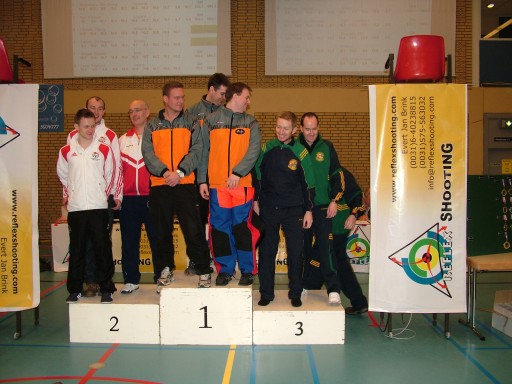 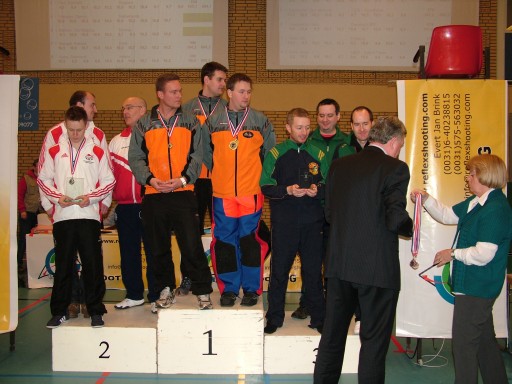 That’s what the Americans so endearingly refer to as a shit-eating grin, and it took several hours to get it off my face 😀 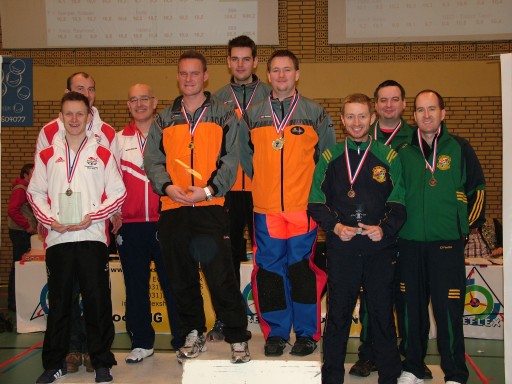 Right now, some Irish readers who aren’t shooters are probably wondering why a third place medal is a big deal. Here’s why. The team medals went, in order to:

And despite all that whinging, we were only 20 points behind the English team, and only 32 behind the Netherlands team (out of 1800 points) and when you look to the PBs of our team we could have pulled up 16 points right there just by equalling our best. Add to that the point that my kit was ten years old and way past its best-before date and the point that my rifle hasn’t been serviced in the past ten years (the lads on the circuit will have theirs serviced at a minimum once a year, and more normally at every major international match by the manufacturers (who go to the matches to do so) and that’s another few points from the kit alone. So when you take the kit element out of it, our scores were right up there in contention for the gold medal.

Now don’t get me wrong – the lads on the other teams are lovely chaps, all of us are friends and they’d be the first to offer to help if anything went wrong in a match and vice versa (it’s not unheard of for competing nations to loan each other everything and anything on the line (yes, rifles included), and we usually stay in the same places and eat together) and I’m actually rather proud to get to compete with them and when Huckle shot that 598 we were all thrilled for him because he’s worked so hard for it.

It’s just that looking at those scores, there’s a part of me that wonders at how,  in only our free time outside of our full-time jobs, we’re close enough to full-time fully-funded Olympic teams that the gap could be closed with just money, and not that much money at that. And that part of me is desperately proud of what us little Irish shooters can manage to do.

But hey, that’s just me.

Anyway, we figured that we’d pack up the kit and head back to the chalet, maybe get a nap in the afternoon after lunch. So we walked out the door to find that that cloudbank in the eastern sky that morning had shown up after all: 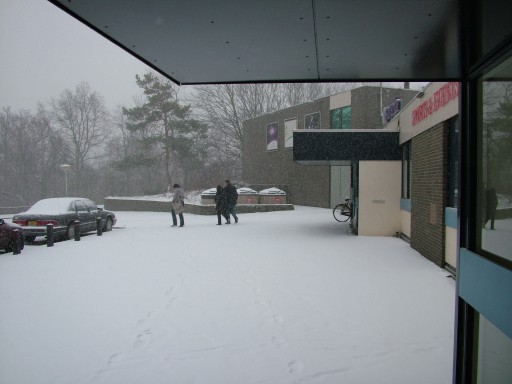 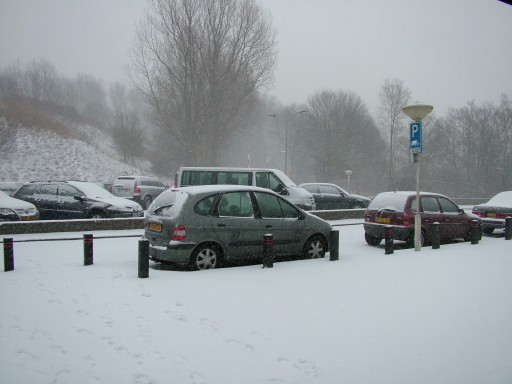 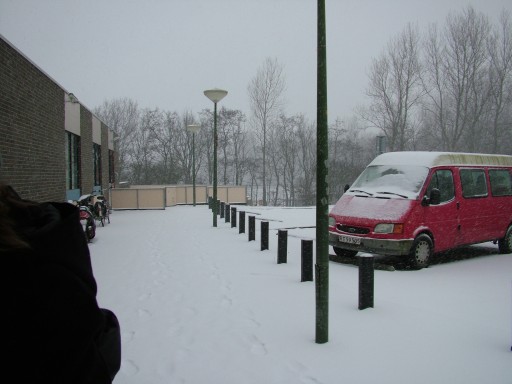 Feck. Three inches or so of snow inside of four hours. This does not bode well… 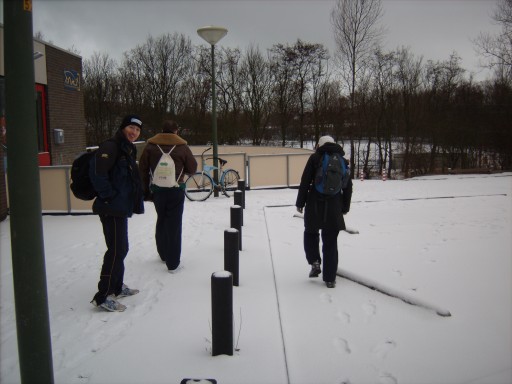 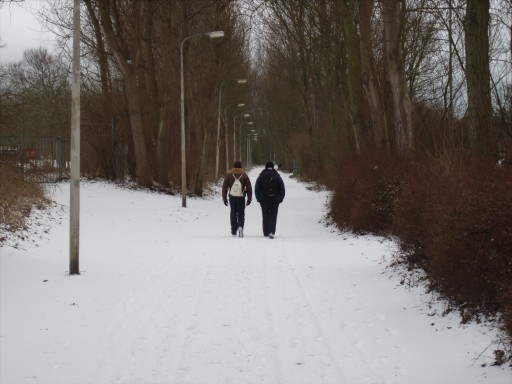 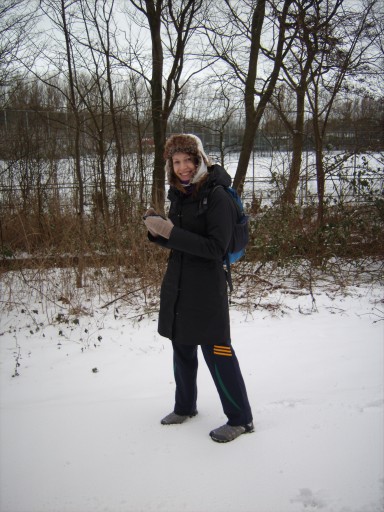 …but in the meantime it’s all pretty! 😀 (If fecking cold when all you’re wearing is underarmour and a light tracksuit designed for warmer climes!)

So back to the chalet, stopping along the way to photograph a very arty frozen beach (it was so cold, the wind was catching the spray from the waves and by the time it hit us, it had frozen into ice)… 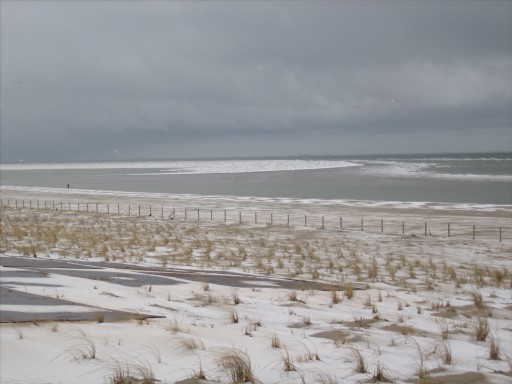 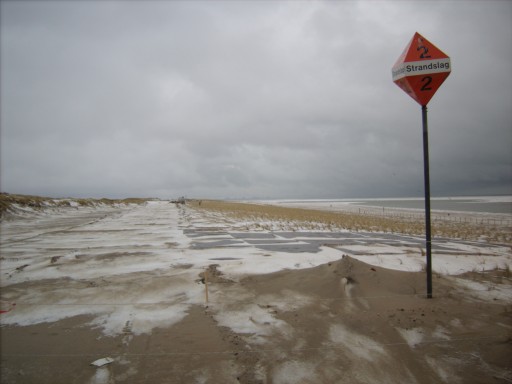 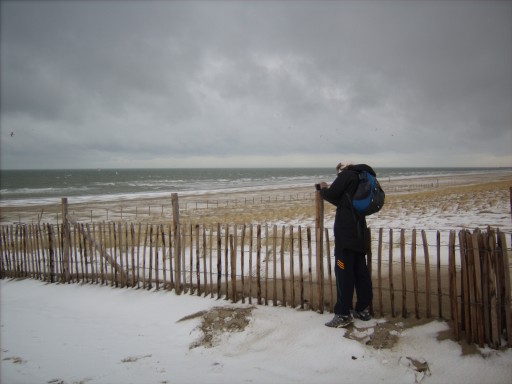 …and also in the campsite shop to do another round of shopping, picking up more chicken for dinner tonight, some herbs and spices (exotic things like pepper!), some hamburgers and baps for a lunchtime treat and a packet of chocolate biscuits because feck it, medal 😀

After lunch (burger-flipping!), we watched Caroline maintain her score from yesterday, Peter shooting well, and I got started on dinner (chicken marinated in ginger, lemon juice, olive oil, garlic and white wine, cooked in barbecue sauce with tomatoes and mushrooms and other veg, served with egg-fried rice made from the first day’s rice pilaf leftovers – which won me the title of chef de partie, which roughly translates to wheresmebloodydinner 😀 ). After dinner, it was sauna time, and since it’s not every day in Ireland that you have both a sauna and a foot of snow on the ground… 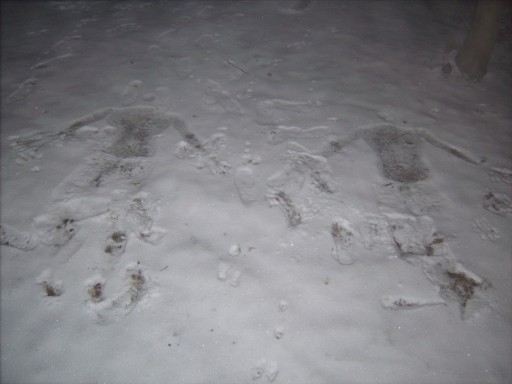 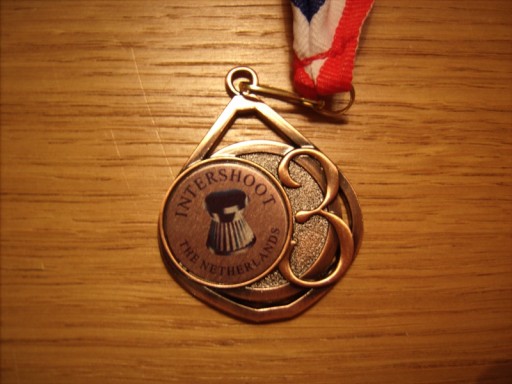 PS. We heard later (we only ran into the lads once during the entire trip because we were always on different shifts in the range) that the Northern Irish Pistol Team also won a bronze medal in their event — well done lads! Ain’t it a grand view from the podium? 😀 )