0530 and out of bed. Wake up in blind panic when I run my hand over my face to find that there’s something horrible on my hand. Turns out to be the Sauer trigger hand glove I bought yesterday and wore all day to break it in so I could test it today – I fell asleep wearing it. The internet phrase is “FML” for those wondering what that’s like. And the jokes I’ve had to endure since then… Oh well, get on with it…

Breakfast at 0600, we’re the first in the room. Coffee, lovely coffee. Scrambled eggs, finally, warm food! Lots of carbs. Everything hurts, we’re tired after two days of this and the travel before it. We’re too tired to be stressed, in fact, which isn’t as good as you’d think it would be; you need a certain – stop smirking, this is the technical term – arousal level in order to shoot properly. Yeah, I can’t stop smirking either. Who thinks up this terminology?

“Hara”, by the way, is the point about two finger widths below your navel; it’s the center of gravity for most humans, and in aikido, you got taught that all motion should come from or go to the center. 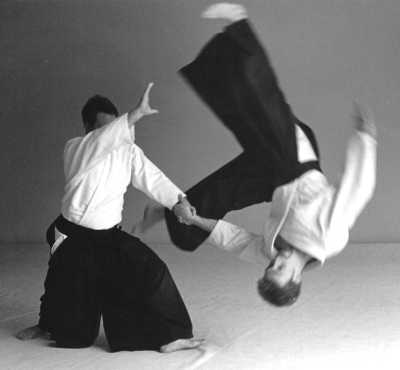 Ignore the guy flying through the air there, that’s the easy bit, look at the guy who isn’t moving. See where his center of gravity is, note that he’s stable and not off-balance despite having just flung someone through what would be the rinse cycle in a washing machine. That’s why they focus so much on the center for aikido. The note “relax through hara” is shorthand for settling in position completely and eliminating all the sources of tension, including the one at the base of the abdomen muscles – in aikido, they’d refer to it as sinking through the center, and like most of the stuff you pick up in aikido, it makes complete sense when you’re doing it and is very efficient shorthand for describing what is a complex movement using lots of fine muscle control; and like most of the stuff you pick up in aikido, it sounds like complete gibberish when you try to explain it to anyone who hasn’t done it 😀

It’s not a bad plan, but it fails to account for the point that I’m approaching my physical limit, and 40 shots into the match, I run right into the wall. My mental state was fine – the best it’s been all through the competition in fact. The technique is grand as well. But when you get the shakes, that’s purely a physiological thing and there aren’t  many match techniques to cope with that, you just shoot a little faster because your hold lasts for less time, and you try to coordinate breathing, head position and taking up the trigger so that when you reach that moment in the still point, you’re on target and ready to take the shot; because if you’re not, you’re not going to be hanging around there for more than a second before you have to break the shot and redo your routine from scratch.

This eats time, you understand. So by the time shot 40 rolled around, I knew I was in trouble. And I was right – I was loading shot 50 when they called the five minute warning (it should have been a ten minute warning, but hey, I was stuffed either way). That’s the point where you realise that you’re alone on the firing line, there are 200 people watching you to see can you get ten shots off in five minutes, and are you going to crack in public. And of course, folk are watching back home as well (Herself Indoors was screaming at a computer screen at this point…). 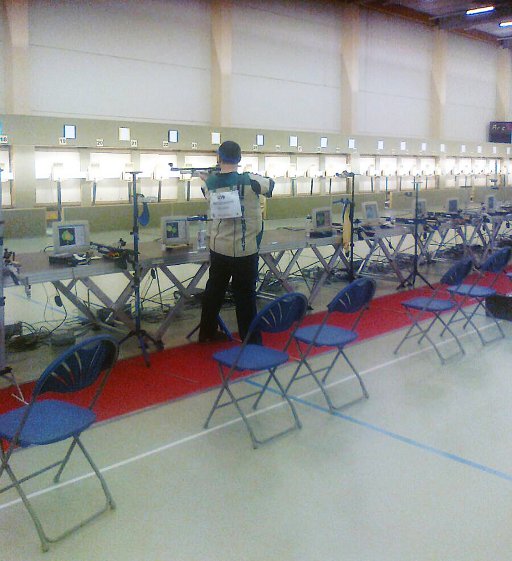 You know, that 568 on day one was sweet. It was nice to know that when I had the mental jitters and a case of nerves, that I could still equal my PB. And day two was nice because I learnt I could leave the nerves behind. But this, this last five minutes? This was worth the price of admission. Stand up all alone in front of that many people under that pressure and shoot? And then shoot a 10.9? 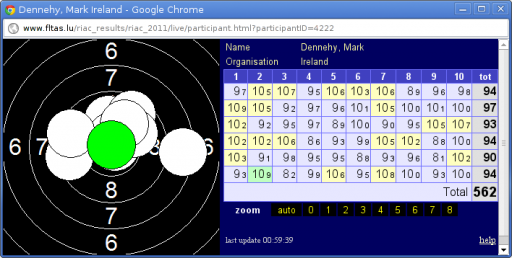 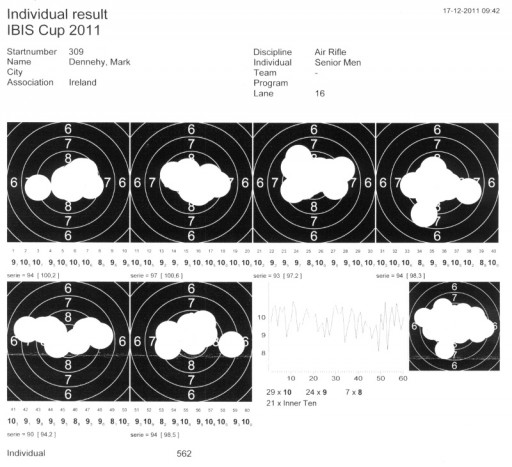 After this, we packed our kit and hauled it back to the hotel, prepped the kit for the flight home (discharge air cylinders, ensure everything’s ready for transport, and so on), packed our bags for the morning and then went out to dinner with the rest of the team to a little steakhouse Peter and Alan (one of the scottish pistol shooters) had found. The steak was fantastic (I think this was the first time we weren’t in calorie deficit for the entire trip) and the dessert… well, combine army personnel, ice cream and enlist the assistance of a funny waitress and you can easily crack up a table of people with a simple practical joke 😀

Then back to the hotel through a genuine blizzard that popped up mid-meal, and we hit the hay for an 0400 wake-up the next morning to catch our flight out. No, not a typo 🙁

PS. Thanks to the folks who kept the snowball fight going till after midnight. And the few dedicated souls who brought it indoors after that. And the chaps who went to bed and fell asleep, locking their teammates out of their room. Otherwise, I’d never have managed to stay awake all night 😀

PPS. Thanks also to the junior Luxair lady who tried to charge us a few hundred euro in excess baggage at 0400 in the cold gray morning for our rifle cases. But also thanks to the senior Luxair chap who remembered that because we’d started the trip on Lufthansa, that Luxair had to use Lufthansa tarrifs (€40 per rifle case, the new EU kind-of-standard-thingy. It was 0400, the details were fuzzy at best).