This morning was a bit of a shock to the system – we got back to the hotel last night to find that the bus timetables had been altered, and we’d only have ten minutes from arriving at the range to the start of shooting if we took the bus we were hoping to take. So we had to take an earlier one, which meant a rather unpleasantly early wake-up call, so instead of breakfast at 0800 for a 1015 start, we were up at 0600 for the 0700 bus. Remember, we’re a timezone over here, so to us it was an 0500 wakeup call, after a bad night’s sleep (I never sleep well the first night in someplace new, nor before a match) and food which was, well, decent enough but not plentiful enough (nobody ever believes how many calories a rifle match like this will burn off – by the end of the competition when I got home, I’d lost seven pounds in five days).

So up at 0600 local, the usual ablutions minus the shaving (stubble over cheekpiece makes a noise that warns of poor cheek welds — that’s my story and I’m sticking with it), and down to breakfast.

Look, european hotels, I get that you don’t do full Irish breakfasts, I really do. But seriously. What. The. Frak? Small steamed beef sausages that looked for all the world like a jack russell terrier had just used the chafing dish as a sandbox. No hot food apart from that at all. And yes, you had scrambled eggs in the chafing dish longside the distinctly unpleasant looking sausages, but It. Was. Cold. I mean, you have a major sporting event in your hotel, with a hundred or so shooters staying there, you couldn’t keep the scrambled eggs warm? Gah…

Anyway, after a DISTINCTLY UNPLEASANT BREAKFAST (I’m still looking at you, unnamed european hotel, don’t go thinking this is over), we got on the first bus out to the range, arriving there at 0730 and spent the next two hours basicly doing nothing, just waiting. Read a little, write up notes a little, but mostly waiting for 0930, which was down as our go time.We found a quieter area than yesterday by swiping an unused changing room (which we wound up sharing with Bindra while he hid from the documentary crew who were merrily playing havoc with his prep), and got down to the task at hand.

As matches went, it wasn’t horrible. My position from yesterday simply didn’t work though; I wound up giving up on the changes to the stock from yesterday and reverting to what I’d trained with in WTSC for the last few months, and that worked quite well. There were some nice series results and some bad; it was on the whole a less consistent performance than yesterday, but with much higher highs. The score was only off by a point from yesterday, but that one number doesn’t really tell the tale well at all. My mental focus for the match was actually really good – surprisingly so compared to yesterday’s mess; it was like all the worries had burnt themselves out. I still knew everyone at home was watching, I still knew we had a lot of spectators, but for the most part I was absolutely fine with it, it was just a background detail like the colour of the floor behind me.

There was one exception to this, and you can actually see it in the start of the fifth string; just before that I’m doing okay, with a 98, and then there are several low 9s and an 8. I’m reasonably sure that was because a rather daft cameraman from the Indian documentary team, in his quest for the best B-roll footage available, stuck his camera out around the side baffles at the target end of the range as I was loading my rifle which, because it was on the stand at the time, was pointed right at his head. This might sound minor if you haven’t shot before. If you’ve spent a decade or two shooting and training new shooters and the one rule that comes above everything else for you during all those years is to not point a firearm at another human being, well, you might appreciate that it can disturb your focus a little.

To be honest, I did entertain the notion of shooting his camera lens just to highlight the danger to him, but I’m pleased to say I didn’t. Even though he deserved it.

Anyway, aside from that kick in the pants, some things were learnt, including a possible new way to settle down in the sighters by just running through a half-dozen shots as rapidly as possible, ignoring the score, just looking to settle the mind. And a muscle (an abdominal one just below the navel) which I hadn’t noticed was tensing up before this. And finding that as much as we’d tried in WTSC to get me to shoot with air in my lungs, it just doesn’t work when I’m under stress, probably because I’ve had a decade or so of doing it that way. Maybe we’re on a hiding to nowhere trying to unlearn that habit. 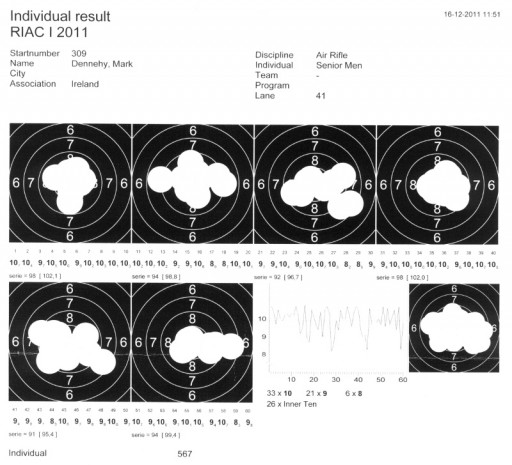 Some nice groups in there in string one and in string four; string two has a tight group and three loose shots; string three is just a bit too scattered and string four is all over the shop at the start but it recovers, and then there was a serious drift for three shots in the last string. Good cores, with fliers in most cases. I can live with that, and more, I can improve on it.

Once the match was done, we packed the gear away into the armoury, bought a few beanies (or mingies if you’re in the Defence Forces 🙂 ) for the home range, and then found the latest Mouche synthetic suit… 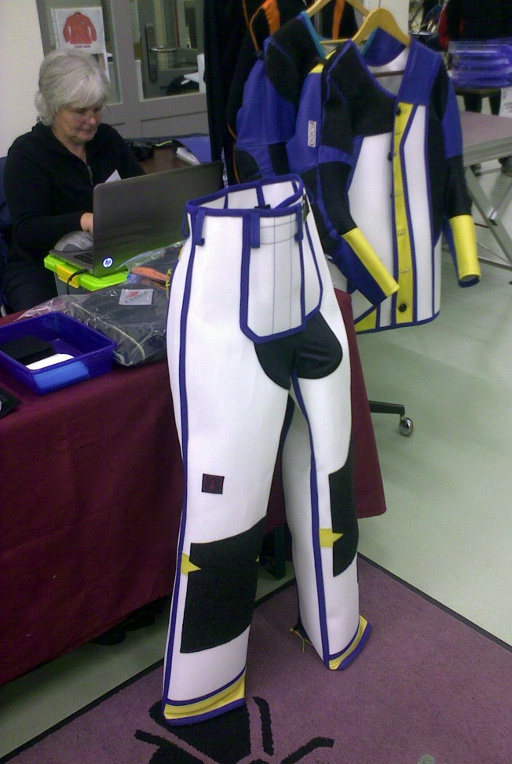 If you’ve never seen one of these, or you’re not technically minded, you’re now thinking “It’s trousers. What is the eejit taking photos of them for?”. But these are the latest thing and they’re notable for a few reasons. First off, unlike the usual canvas and leather suits we wear, these pass the ISSF Equipment Control tests from the moment you buy them. They don’t age the way canvas ages so you don’t need a new suit every other year. They can be washed. Yes, that’s right, you can’t wash a canvas suit. Ever. For the two or three years you’re strapped into it, it can’t be washed. I leave you, gentle reader, to come up with a figure that indicates how much you’d pay to be able to wash a suit you’re going to be strapped into for a few dozen hours a week…

Was your figure €1900? No? Well, that’s the figure. Plus, add in the money for flights to Germany because you go there with your rifle and stand in position and they measure you and cut the material (which is for all the world like someone made loose-weave linen with a white plastic and then run it through heated rollers to make this kind of plastic weave) to fit you and they assemble it right there and then. So for Irish shooters, it’s €2500 or so by the time you get it home. Two shooters have them in Ireland now, and we’re seriously, seriously curious to see them in action 😀

Anyway, we then headed back to the hotel for a much-needed nap (and a jog for Ray) and to get some food and sleep. It’s a funny thing about these matches – you will burn off more calories than you think you can, and you’ll need far more sleep than you think possible. I’m sure we’re going through between three and five thousand calories a day here, we’re definitely needing to go through three litres of water a day at least, and you need to be trying for 12 hours sleep (you won’t get it, but it’s what you need). And tomorrow, it’s an 0530 (local time!) start to be on the firing line for 0800. Yay!

By the way, we noticed today that target shooting over here is – shock and horror – actually thought of as a sport by the media. Back home, we’re basicly treated by government and media alike as being criminals just waiting for someone to turn their back for a moment before we plough through the nearest creche eating babies. Here, we’re in the papers in the sports pages and people accept it as totally normal. In fact, they just don’t understand why the two crazy Irish lads thought this was a great thing – we must have looked like some random strangers ooh-ing and ah-ing at running water in a hotel bathroom… 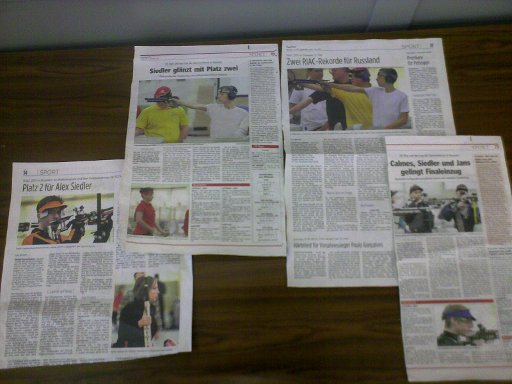