So up earlyish, said goodbye to Herself Indoors as she headed off to work, then loaded the car and headed to the airport. Met up with Ray and off we went. The trip was fairly uneventful, oddly enough, but I guess that’s Lufthansa for you – efficient, unflappable, calm. All terribly civilised, and even the trip through Dublin airport was hassle-free, a first for me. The exact opposite of KLM… but that’s another entry. We got to the hotel, met up with Peter and squared ourselves away for the next day, which was for training and equipment control.

Training went well; some small modifications to the buttplate to get on target, and a good string or two  (97 with an 8 in the last string) and I called it quits for the day and went to equipment control; only the rifle was checked and it was fine. So back to the hotel we went, got something to eat and turned in for the night to hit the first match early the next morning with an 0900 wakeup.

Day one was a nice easy wakeup at 0900, breakfast in the hotel (why, oh why, do european hotels never ever have decent porridge? It’s always cold meat and cold cheese and cold cereal and any hot food is usually fairly unfamiliar or hard to digest. Not what you want when you’re facing into a shooting match) and then to the range by bus. Arrived there well in advance. Got the kit prepped at 1315, was doing holding exercises at 1330 and trying to ignore the documentary team that was following Bindra around. Seriously guys, great to see you doing that, fantastic to see a shooter get publicity, we need it for our sport, but what we don’t need is a member of a film crew in the news because they walked into a danger area on a range and got shot…

Prep time was at 1350 and the match kicked off at 1400. And I don’t think I have ever been more anxious in a match in my life. You know there are 200 people on the range between shooters and spectators (and there aren’t that many shooters). You know everyone back home is watching your score and will be wondering if you’ll put in a score that doesn’t embarrass you. And it doesn’t help that up and down the line are shooters who are famous (at least in our little circles) for putting in high scores. Dick Boschmann (as in, the guy whose Rika/Scatt/Noptel traces are in every single textbook on shooting published in the last decade) is over there coaching the Netherlands team, the GB team is enormous with coaches and managers and lots of people, and we’re just these two chaps over here on vacation days. It’s an easy spiral to get into, and I spent my entire match fighting it, doing a little better in each string until the last string when I had a rather weak finish for a total of 568. 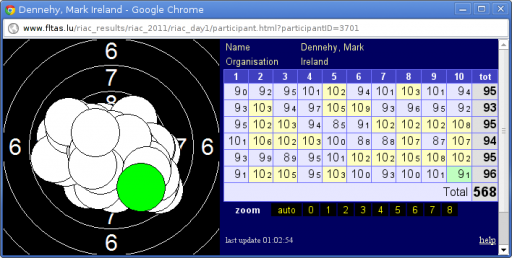 The printout from the system gives a better sense of what was happening though: 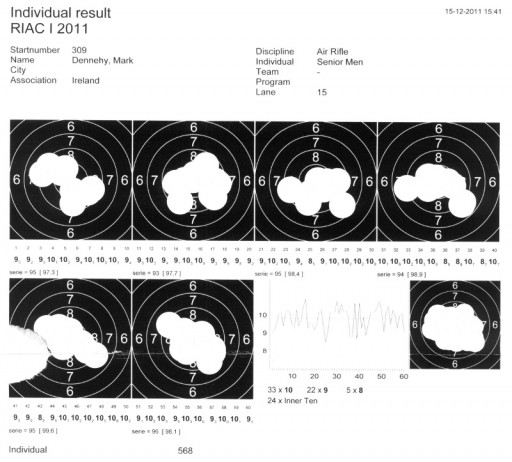 You’ll notice the final overall group is large, but not particularly biased in any direction. Wider than tall, but that’s normal. Basically, my hold went to pieces, but not so badly as it felt at the time – I visibly had the shakes when I came off the line. It didn’t help that the electronic targets in use here do not show a match timer and I don’t normally take a watch to the line because the megalinks we use at home do show that timer, and I’ve been trying to ditch that urge to carry everything from my toolbox up to the firing point, instead taking a minimalist approach. However, the decimal scores (which are really a better indication of performance) rose string-on-string all the way through to the end when my worries over time got a bit out of control. The breakdown of scores wasn’t great – five 8s? Ich. But tomorrow is another day, so we pack our kit up and leave it in the armoury and head back to the hotel for food and sleep because tomorrow is an early start…

Oh, and what opening post in a match report doesn’t have photos of the range?