First, a word of explanation for those who don’t live in Ireland. We don’t have any gunsmiths here. Well. We have one or two on the cartridge rifle side of things, mostly dealing in fullbore stuff. But we have noone who can service an air rifle (unless you include “wrap it up and post it back to the factory in germany” in your definition of “service”. Which I don’t). Which means that most airguns in Ireland haven’t been serviced in quite a long time. Mine hasn’t been gone over by a qualified gunsmith in a decade or so. Others for even longer. Which I don’t personally think is a good thing, because these aren’t battlefield weapons, they’re precision instruments and they do need a degree of care and maintenance, and while you can handle basics like cleaning and so on at home, any real overhaul needs a more equipped setup than anyone could reasonably be expected to have at home. So, it’s a niggle. So I thought I’d check it out, just to be sure, so I went and bought myself a chronograph (well, I say myself, but it’ll live in WTSC for the most part for the other club folk to use). As before, ebay is your friend. It’s a pretty standard airgun model, the Combro CB-625 Mk4: 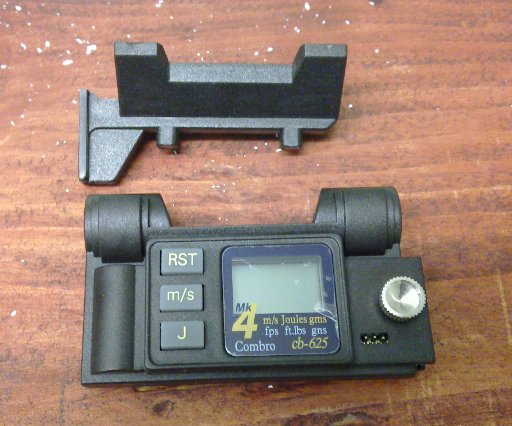 It’s a simple little gizmo – the bit up top there is the bit that you strap to the muzzle, and bit underneath is the actual chronograph itself. The pellet goes through the two rings above the LCD screen and it measures the time that takes and does the math for you (and estimates the kinetic energy based on the estimate of the mass of the pellet that you give it).

So I get it in place and I shoot away (from cold, with the tank just screwed into the rifle), and find that over 20-30 shots, I have an average of 176.8 m/s for a muzzle velocity (with a 2.4 m/s spread, from 175.7 up to 178.1). Which according to Uwe Anschutz, is perfectly fine (and by the way, that’s Uwe Anschutz answering an email personally. Which is pretty excellent).

However, the first two shots were far lower – the first was down around the 130 range and the second was in the 160 range.  So those first two shots you might hear me firing on the range before a match or a training session? Yeah, they’re not an affectation, they’re a real thing 🙂