Last night’s training was a bit of an exercise in knock-on effects and chaos theory in a way. Matt had noticed a while back that my trigger finger alignment with the trigger is just completely awful, with the finger coming in on the trigger at a significant angle instead of coming in onto it so that the finger is at right angles to the trigger shoe, which – for those readers who don’t already know – can cause you to flick shots out of the ten and into the nine when pulling the trigger.

So tonight, Matt moved my pistol grip, rotating it so that instead of it being vertical relative to the rifle when sitting on the bench, it was vertical when the rifle was in position (so it’s canted over to the left side of the rifle by 10-15 degrees or so). The effect on the trigger finger was perfect – right angles to the shoe naturally. But the effect on the rest of the position was enormous – suddenly everything felt off and I had no confidence in the rifle’s stability and it felt like the rifle itself had physically broken at the pistol grip. End result was a looser group despite the better triggering. So we unwound the change and went back to the old setup for the moment (we’ll have to fix this eventually, but there’s a match in UCD on Sunday so breaking stuff now would just do more harm than good).

After resetting the change, the groups came back to normal: 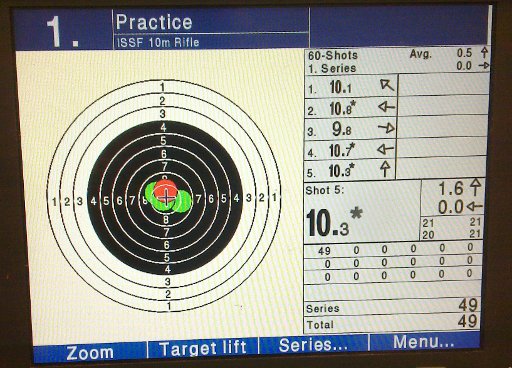