Took a fortnight off training over the last two weeks (and time off work for a holiday as well), mainly to catch up on sleep – my training schedule was seeing me leaving WTSC so late that I wasn’t getting home till after midnight on a work day, which isn’t the best thing in the world for your sleep cycle or your health. So after a week of sleeping a *lot* to catch up, and another week of general R&R, it was time to go back to the range.

I was expecting much rust, and there was some – but less than I was worried there might be. The position Matt, Geoff and I have built up over the last while is a fairly solid one both physically and technically, and getting back into it was a short half-hour of stretching and dry-firing. I switched over to live firing at that point, but everything was a bit loose. I hadn’t noticed (though Matt spotted it quickly) that my cheekpiece was now too low by a few mm; easily fixed. The grouping was still a bit loose though.

Matt stopped me shooting at that point, seeing how I wasn’t settling, and we spent a few minutes talking through my mental game and my approach to the shot. I spent a few minutes visualising and working on my mindset (well, not exactly mindset, but English has a desperately inadequate vocabulary for describing mental processes), and once I had found my place again mentally, shot ten shots: 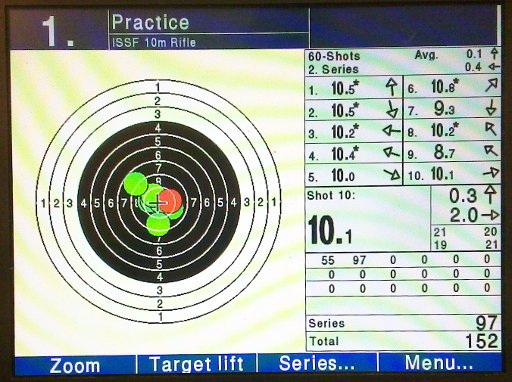 Not a bad result. The 9.7 was a technical error (sight alignment was off but I didn’t spot it at the time), and the 8.7 was my one flier (probably to do with the sight alignment as well, but I’m not sure). The rest were quite solid shots though, so I’m happy enough with that. We’re going to continue working on the mental approach as our main task for the next while; if I can physically shoot like this in a crappy ill-fitting jacket and trousers and old boots, then the problems I’m having in matches aren’t to do with my position, but to do with my mental state.