A pretty good evening’s training tonight. Got to the range around half seven and after the normal breathing exercises (look, if you drive for an hour in Irish traffic to get to the range, some deep breathing is pretty mandatory to get rid of the terror or urge to kill, depending on which end of the traffic you were on), some dry-firing for an hour or so, working on focussing on the process instead of the result. And of course, some chat over the latest toys in the Centra/MEC catalog with the others 😀

Friday nights are turning into the club training night again, with Matt, myself, Paul and Ashling now training regularly there, which is nice to see again.

Adjusted the jacket a bit as well – I’ve not been bothering with the fourth and fifth buttons on the jacket as when I started back late last year, they wouldn’t close properly. 30lb lost since then, so I’ve shot with the fourth closed, but I noticed that while the belly’s not the problem anymore, the shape of the jacket is still all wrong, and it was fighting the position and my breathing; moved the button about an inch with Matt’s help and suddenly it’s gone from fighting me to working with me. Excellent. More dry-firing..

And then after the dry-firing, some live-firing, and I noticed the sights were off, deep in the 8-ring, which was odd as yesterday they were fine. I adjusted them, and shot a ten-shot string for score: 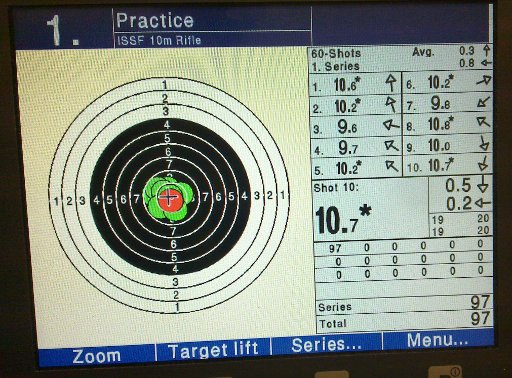 Not perfect, the sights were a few clicks out at the start (about six in total – the Free is about 9-10 clicks per ring), but after I recovered that, the rest were fairly on target. If I’d shot the string with the sights on, it’d have been a 99. Not bad for a crummy jacket…

Of course, never a night without finding a new problem – while taking the rifle apart, I noticed that the Free rearsight, even though it was clamped to the rail securely, was not flat on the rail – it was tipped ever so slightly backwards (I think it’s because it won’t sit flat on a surface due to its design, and the clamp doesn’t drag it down and forward as you tighten it). Which, if it’s not tipping a consistent amount – and I don’t see how it could be – would explain why I keep having to adjust my sights on the same range without changing the rifle setup in between days.

Oh well. From now on, when assembling the rifle, press down on the front of the MEC rearsight, then tighten the clamp. Kinda wish that was in the thing’s manual…