Friday was a pretty good day’s training, but that peak performance level felt just out of reach, thanks to various things going sideways.

Early start, got to the range around ten to seven or so, meeting up with Paul at the door of the range. Usual startup – the yoga mat is really helping with the warmup and while going from the cobra to the downward facing dog postures looks daft, it’s really efficient at getting the muscles that you use in position all warmed up. It’s also spectacularly efficient in making you look daft and alarming everyone with the noises it creates…

That done, I took a few minutes to run twenty shots through the new chronograph, then got set up for RIKA training. First ten shots were standard, look-where-you’re-going stuff and went really well (would have gone better if the sights had been tweaked though – hardware problem #1): 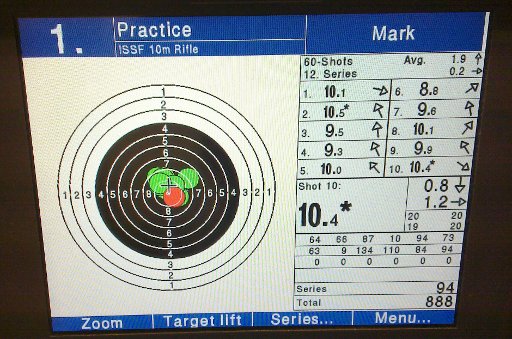 And the RIKA traces showed that this would have been an outstanding string if I’d tweaked those sights. (Again, the RIKA’s calibration is drifting, so watch the traces, not the points of impact, which are almost random at this point): 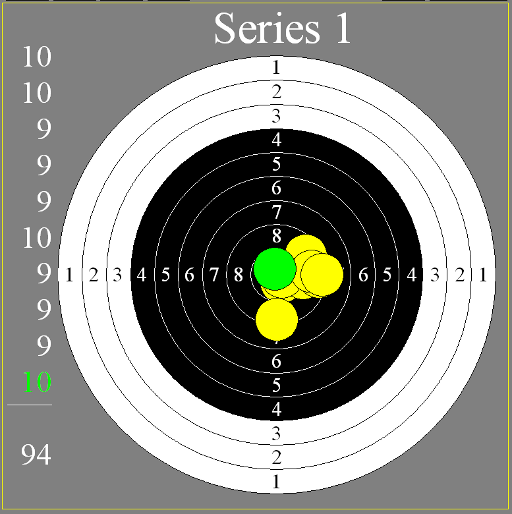 Not bad, though getting a bit hinky at the end – shot eight was a bad trigger and shot nine wasn’t great either, but that could have been a decent 96-97 if the sights had been on. I have no idea what happened to shot 6. At all. The RIKA trace was fine, with really good hold, trigger release and follow-through, but the shot was an 8.8. I really, really have no idea what happened there. For all I know it could have been bad ammo (which would be the first time I’ve seen a verifiable case of that in the last few years). Mind you, if it was bad ammo, and it can do that much damage to a really good shot execution, then I really need to get a selection box of pellets and test out sizes (which isn’t that easy in Ireland, but there’s got to be some way to do that…).

Next up was ten shots fired with the target and RIKA screens turned away, and it felt like a decent string – no really hairy shots, all with pretty good holds and good approaches: 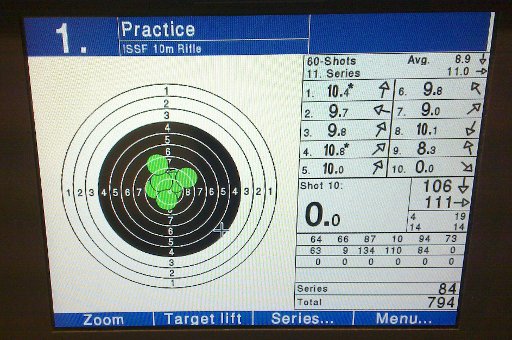 Turns out, the paper tape from the megalink had hit off the RIKA sensor and tripod, doubled back and fed back up into the megalink. End result, one very confused target and the last two shots at least were utter silliness. Still, it started well enough…

So Matt extracted the tape from the target, set everything up again, we fired off a few more rounds in calibration exercises, and then did Matt’s new exercise (well, new to my training plan, anyone from WTSC will remember it as the “shooting at the stars” exercise). The idea is to approach to target and hold as normal, then look off to the right of the target (or left, if you’re a left-handed shooter). You then keep your focus there, maintaining the hold with the periheperal vision only, and then fire and follow-through, all on periheperal vision. The results… were pretty much as you’d expect: 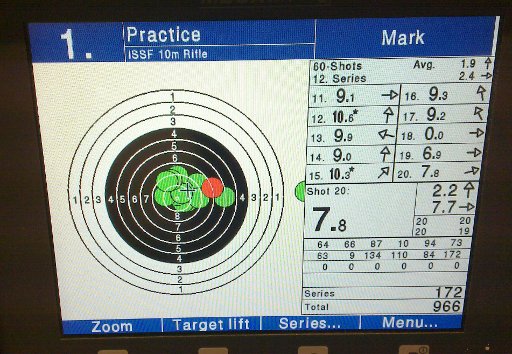 Traces show it pretty clearly as well – mostly it’s okay, but if the hold wasn’t set up correctly, the NPA heads right off to the right as soon as the focus leaves the target:

But the payoff comes when you take then next few shots after the exercise: 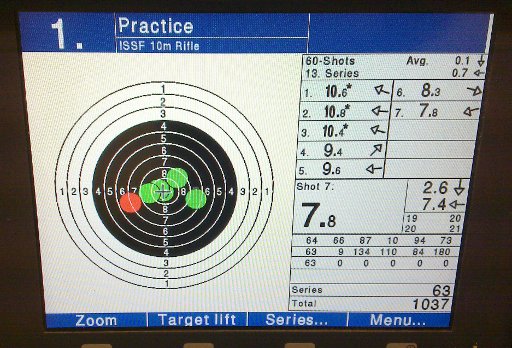 Yes, I know, but ignore the last four shots where my back is having fun and my mental focus is being worked on by Matt, Paul and Aisling chatting about rifles in the background (which is disturbingly effective at being disturbing, by the way). All three of the first, focussed shots landed in the same hole and the traces tell the story nicely:

Very tight holds, very clean trigger releases, very even follow-through. No NPA problems. Matt’s exercise really does work on focussing the attention on the NPA during the setup of the position.

So, one week to the next match out in UCD. Three days training left. Almost all of which will be dry-firing and working on Matt’s exercise. And trying to sort out the blinder design – I tried a different kind of tape on the perspex than scotch tape and it worked really well. Trying ordinary sellotape next. There’s a happy medium in here and I’m going to find it…

As to the match itself, the plan’s simple enough:

The goal is to try to shoot all 60 shots with the right shot routine, the right mental focus, and running all the in-position checks against balance and inner position as I go (I deliberately don’t have a target score in mind for this match, and won’t until I get my new shooting suit).