Another day, another three hours on the range training 🙂

Today started off warming up as usual, then on to dry-firing. Same idea as yesterday – dryfire and then break position when the position felt right, walk about a bit, then come back and setup again and repeat. Only used the one firing point today though because it’s Friday and usually that means it’ll be myself and Paul and Ashling and Ray and Matt training away (Ray’s en route to the World Cup in Ft.Benning at the moment though so no Ray today – good luck if you’re reading this Ray!). After an hour or so of this, I took a break for a bit, then went back at it, this time firing two shots after I was happy with the position. I found I was grouping in the same spot as yesterday, which was odd – I thought the sights would have been in on the electronics. I must have adjusted them at some point for some reason. Anyway, I dialled them back into the ten ring and went on to shoot ten shots (in two-shot groups, breaking after each and rebuilding the position): 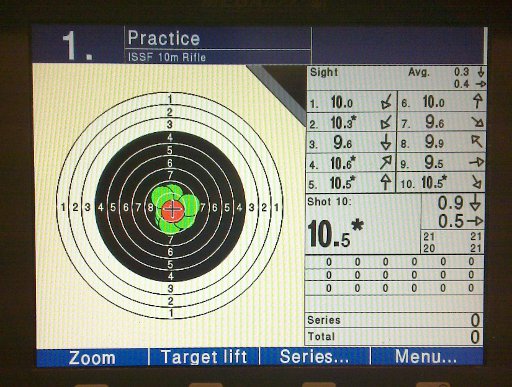 It wasn’t a bad result, with the jacket the way it is now I’ll take anything over a 95 as a good result. However, I was rushing the follow-through (or as Matt put it, “Followthrough’s shite. The rest is good.” Matt’s nobel prize for literature is expected any year now).

So I shot a ten-shot string in one go, watching the followthrough: 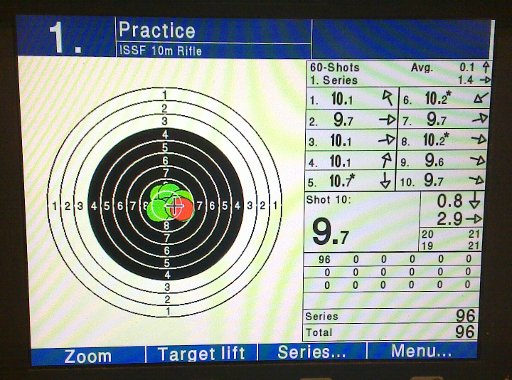 Again, not a horrible score, and the sideways wobble could be down to tiredness (at this point I had nearly three hours shooting put in and today was my first day back in the gym after twanging my hamstring). But watching the recoil during the followthrough showed that immediately after the shot, there was an oscillation from left to right, usually random in direction and magnitude, if fairly small (I was shooting with a 3.9 foresight and the aiming mark never left the ring during the oscillation). Matt thinks I’m still holding the rifle on target. So that’s the thing to work on next week. I have to stop holding on target – the rifle has to be sitting there pointed at the target, not being held on target by muscle (because muscle twitches and that’d give you random fliers).

Still though, I’m pleased with my progress so far. Next match is in four weeks – I might be able to hit the MQS (570) by then if all goes well, though the jacket really is a limiting factor there. Over 20 shots, it’s easily doable to hit that standard (the two strings above are better than that standard), but over 60 shots, fatigue sets in without the jacket, which is a worry. We shall see…