A decent amount of sleep, food before training, and time for the new shot routine to start settling down, and everything seems to be coming together better. There is still looseness in here, don’t get me wrong – and that jacket is earning a lot of hatred at the moment – but the good moments are starting to outweigh the bad and the good moments are so very, very good 🙂

The placement of the left elbow is still a bit odd here. There’s a fair amount of re-jigging to get it right and that’s all done by feel, there’s not much in the way of a visual reference point apart from where the rifle ends up pointing. which is a bit indirect really. But the more I do it, the more I get used to the right feeling and how to get to it, the better it gets. And the results are excellent when it’s right: 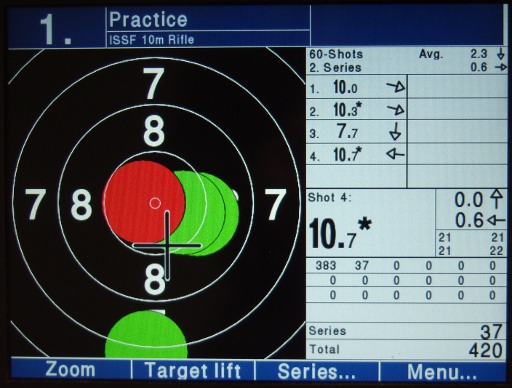 It’s when it goes wrong that it’s odd. That seven came out of nowhere. Matt and I both thought the shot was perfect… right up to the trigger break. There was nothing he could see or that I could feel that explained it, but when the trigger broke, the foresight dipped, just once, and then came back up to hold steady on the target. Very odd. Didn’t happen again for the entire night.

We stuck to dry-firing after those few shots though, just to work on the routine itself. I have a bit of dremel work to do on the cheekpiece as a result (that, or I need to lose a nostril 😀 ) – when I drop my head from the pre-aim, the nostril catches on the forward corner of the cheekpiece, which is no fun at all. Trimming off that corner might help, but the cheekpiece is african blackwood so it needs the dremel to do this cleanly. We also tried shooting with braces rather than a belt for a while – the lumbar support feels better, but I’m not used to it enough to use it in the match in UCD this weekend.

Overall then, a good night, and even an attaboy from Matt, which brings my total for those up to about six. In ten years. Which is encouraging. 🙂