So the plan for tonight was to try to replicate Friday’s success by widening my stance a little. As you might imagine, that didn’t work, but the night wasn’t a complete loss. I suppose the complete power failure to the range when I got there should have warned me it was going to be one of those days 😀

Setting up was easy enough once power was restored – getting the camera high enough to get an overhead shot was a bit fiddly, but nothing too horrid. And the temperature was pretty appallingly low as well. But no big deal. Into the kit, into position and shoot away (the same way as on Tuesday) for a few shots to warm up, and then widen the stance:

Not by much, but it was enough to stop the hip kicking up to silly amounts. However, after that improvement, it all went sideways. Either everything worked right and I saw really solid holds and very deep tens:

Or something went wrong, I didn’t spot it and I saw wild eights at either 3 or 9 O’clock (vertical dispersion was minimal even then): 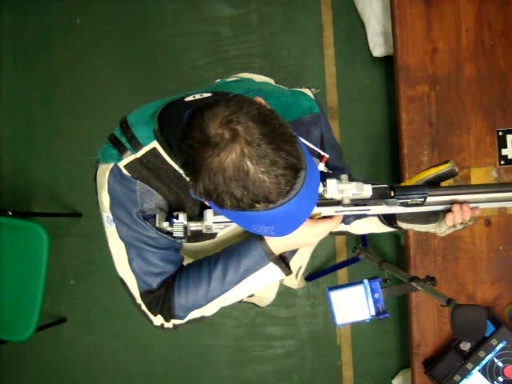 But the inner position is all weird and unfamiliar. That’s not necessarily bad in and of itself; but it does mean a lot more training over the coming days without necessarily firing anything, just walking through the shot routine, fine-tuning bits, learning other bits and worst of all, unlearning the old sense of what was right with the inner position.

After a fairly frustrating two hours of shooting on the range, some of which was watched by Geoff, I packed up and went to talk to Geoff about this. This is where the session was turned around, and we spent about an hour going over my inner and outer position and shot routine, nailing a few defects, getting a few plans together to improve things, and generally analysing whether there was enough potential in the new setup to continue with it. The upshot of which is that I’m keeping at it – when it worked, the new routine was the most stable setup I’ve ever had. So I’m going to crack on with it, and hopefully by the time the next match (the UCD Open) rolls around on the 27th of this month, I’ll have enough practice in that I’ll break the 560 mark and be back up to parity with the old position, and can continue to improve towards the Nationals on April 10. Breaking 570 (which would be a new PB for me) at the Nationals would be very sweet indeed…