So at the WTSC open a weekend or two ago, Ray and I got to talking about training as a group, and last friday, himself and myself and Paul O’Boyle all tried showing up to train together on the WTSC range along with Matt Fox. The timing didn’t quite work out and so we had two groups training (me and Ray and then me and Paul and Matt) instead of one session, but it wasn’t the worst attempt to start something ever. Hopefully, it’ll grow to something really effective in time.

More immediately, I managed – with Matt’s help – to finally (a) sort out a problem with my head position I didn’t realise I had, and (b) figure out how to repeatably set up the hand position Geoff and I worked on the week before.

The head position was one of those things where you really needed someone watching you shoot closely to spot. Even now, looking back at the video from the last few months, I can’t see it – there’s just not enough resolution on the screen to spot it. The problem was that during my shot routine at the very end, my head rotates forward onto the cheekpiece:

As to the hand position, it was quite vertical as you can see above, and I had a reference point for my thumb that let me repeat it – however, Geoff noticed that the rifle would start to come over onto my thumb muscle excessively, so we altered the hand position, and the rifle felt far more stable; but I hadn’t the reference points that let me repeat it easily until Friday.

First, run the left index finger back across the right edge of the rifle foreend until the first joint catches on the edge: 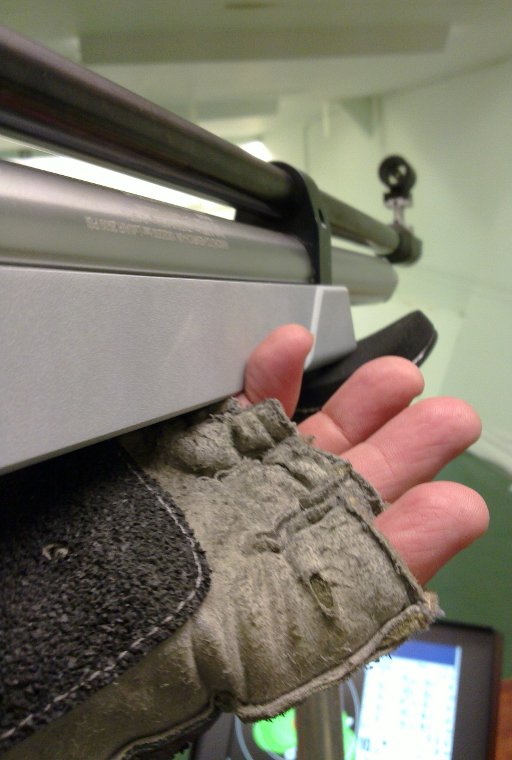 Then draw the hand back in towards me until the left edge of the rifle foreend meets the beginning of the thenar muscle (ie. the big muscle at the base of your thumb, in your palm; the foreend edge will lie along what palm-readers call the life-line). Then slide the whole hand back, maintaining the sense of contact at both points until the white seam of the top grip patch on the palm of the glove lines up with the rifle’s CoG mark: 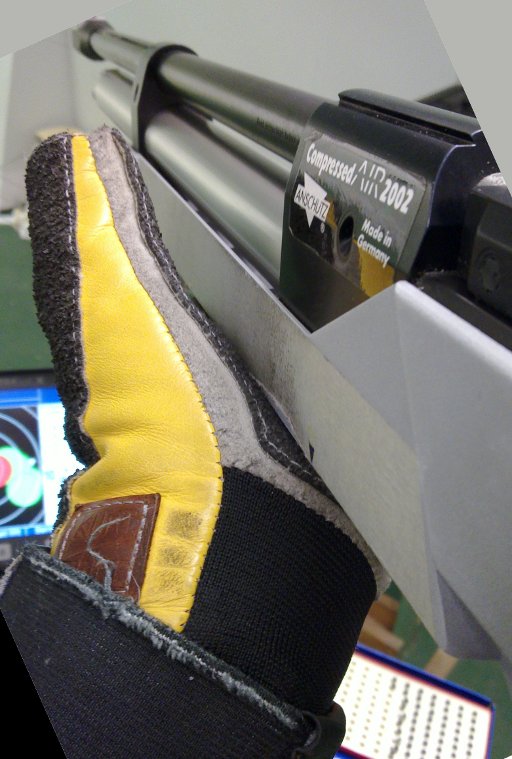 Now curl the other fingers of the hand and the fingerpads should contact the top of the stock, but not the action or barrel of the rifle: 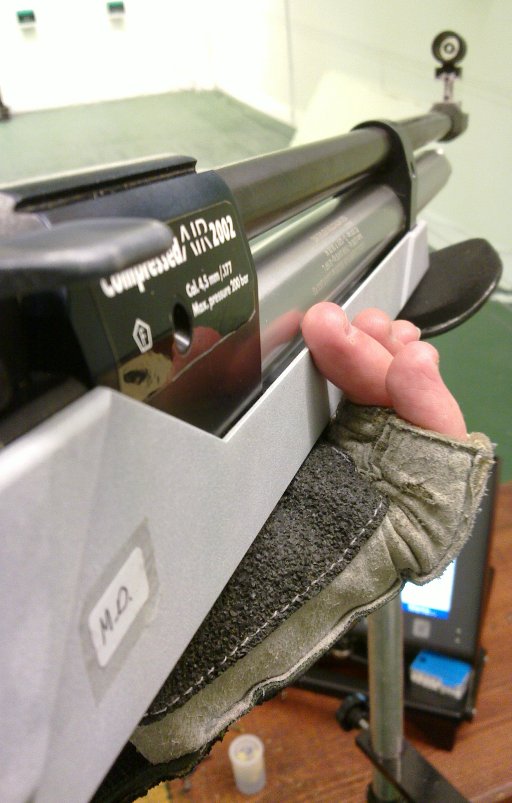 And now, after the lift, the elbow should drop into place on the hip – and if it needs to be re-dropped, the rifle stays snugly in the gap between thenar and hypothenar, cushioned by a carpal ligament and utterly stable. Most excellent.

So now, the focus on training switches from technical experiment to working on core stability and balance. At least with the position; one of the other fun things from Friday night was that Ray and myself tested my rifle setup for accuracy. The test is simple enough – take a kneeling roll and use it as a support for the foreend and while seated, shoot ten shots from the shoulder with your rifle, taking as much time as needed. If you can exceed 105 with 10 shots (scored decimally), then there’s no problem at all. With my normal RWS R10 4.50mm pellets, we shot just under 103, and the group was a bit side-to-side loose.

We then used the chinese pellets that Ryan sent down from Intershoot for us to test late last year (been trying to test these since November last year) and they shot 104.3 but the group was all consistently off-center; I’ve no doubt I could hit the 105 with these if I’d adjusted the sights.

The group was significantly tighter and more even – the R50s spread out side-to-side (but held vertically) while the Qlang Yuan pellets kept a nice regular, tight group. I’m not quite convinced I need to batch test yet, but I’m about half-way to believing it’d be a good idea. I have asked Geoff to try to get in a few tins from RWS in a range of sizes from 4.48 to 4.52 so I can test for size at least, if not batch. I’d rather stick with the RWS because they’re easier to source (not to mention that buying individually packaged trays of pellets like the QY pellets above is just a wee bit much even for me 😀 ). If they don’t group though, there’s QY, H&N and JSB pellets to choose from now, so something will fit my rifle well enough 😀

And I’ve also sorted out getting my eyes retested (well, eye – it’s just for the shooting lens that I’m testing) shortly – it’s darn handy when the optometrist is also a shooter. The results of that should be interesting, it’s been nearly a decade since I was last tested.

All in all, a really highly productive training session!