My left elbow is broken. By which I mean, it’s not doing its job when I shoot. This is what it should be doing: 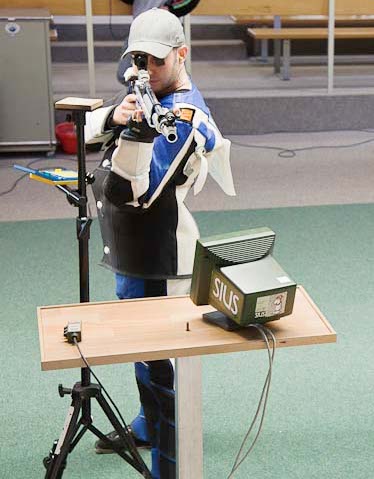 This is from the most recent World Cup Finals. Notice how his left elbow is placed so that his left forearm is vertical under the rifle . The theory here is simple and universal; the weight of the rifle is supported by the left forearm, which rests on the left pelvic bone which is connected to the bones in the left leg – ie. from rifle to floor, it’s bone that supports the weight, not muscle.

For that to work, the elbow has to go into the same place, every single time; and for it to work well, the left forearm has to be vertical, at least in the left-right plane (it’s ideal if it can be vertical in the fore-aft plane as well, but sometimes that’s not possible because of shooters’ morphology).

Mine, however, is not going into the same place every time. It’s not even close. And worse, I can’t feel its location except through proprioception; which isn’t the most accurate of our senses. Once again, it’s that blasted jacket at work 🙁