So tonights training and tuesday’s were a depressing kick in the pants. The goals were to patch the hole I found last time in my jacket’s shoulder patch under the buttplate of the rifle and see if that solved the problem of inconsistency I ran into at the UCD Open. The initial repair was done with a small strip of electrical tape on tuesday.

Tonight, I added a larger strip of duct tape tonight (oh duct tape, is there anything you can’t fix?). I did get some suede from ebay, but it looks to be more of a job to sew that on than I thought, so I just cut out replacement patches from it and I’ll try a more elegant repair when time allows. If I even get round to it before dumping this jacket for a better one.

The problem was, after the repair, I still had an absolutely horrible hold. In fact, “hold” was somewhat of a misnomer, as it implies stability. I was all over the place. Reviewing the video footage highlighted that (and pointed out that having the camera mount overhead was a good idea). 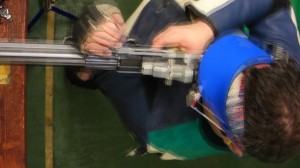 It could have been low blood sugar, I suppose, or it could have been the deterioration in physical condition caused by the poor weather keeping me away from the gym (yeah, right, poor weather…). But that’s the thing, I’ve no idea what was causing it. And the way that the sights didn’t seem to be adjusting the way I thought they should did my mental game no favours either. (I’ve since ordered a dial indicator and mount for the club so I can test the rearsight just to be certain, but I’m pretty sure it’s okay).

After a while, I just gave up in fustration and shot a UCESSA pistol round and went home. Not the best night ever.