So before training yesterday, there was a bit of experimentation. For a while now we’ve been looking at cheaper ways to get started in ISSF shooting, and we’ve found that the lowest cost of entry is for air pistol with either an IZH-46M or a Tau7 pistol, for about €300 all in. Which isn’t bad, and since both are russian in origin, we’ve been looking at other russian rifles to find a cheap way into other ISSF disciplines. In smallbore, the IZH CM-2 is well-known already as a good basic beginner’s rifle:

and its price is competitive with other possible options like the Vickers Jubilee I looked at in an earlier post.

Today though, we had access to an IZH-61 air rifle to test, and it’s in air rifle that we’ve had the least success in finding a reliable, readily available, basic beginners entry-model firearm (for those outside of Ireland, yes, airguns are classed as firearms here. Yes, we know, that’s daft, but we have to work with it. Stop showing off 😛  ).

So here’s the IZH-61 for those not familiar with it: 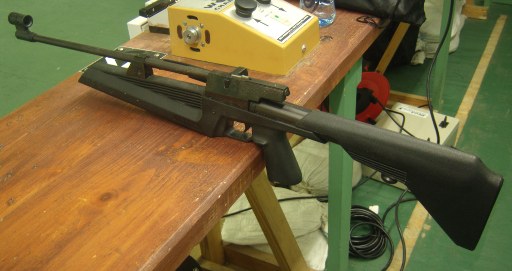 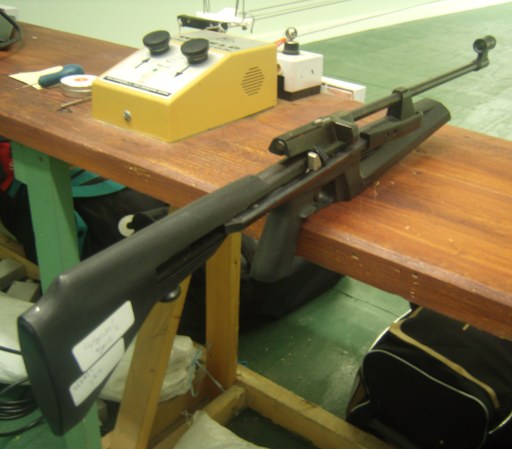 The stock is mostly black plastic, but it’s sturdy enough. The buttplate is adjustable for length via the small screw you can see underneath the cheekpiece, and the trigger is adjustable for location and weight and travel, though the trigger itself… is not the crispest, smoothest thing on the block. But that’s okay; we’re looking for cheap and basic here, and so long as it’s not so bad as to actively hinder a beginner, we can tolerate imperfections, even gross ones. 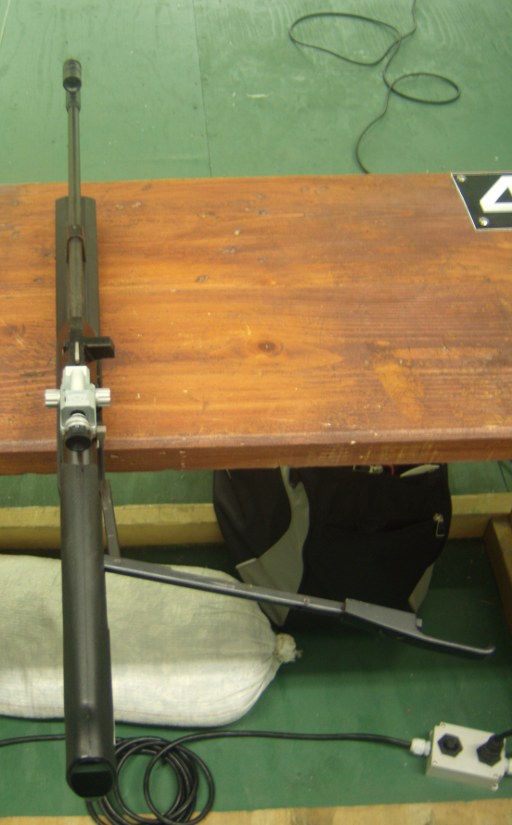 As you can see, it’s a hand-cranked side-lever affair, and you can just see the release catch inside the handle: 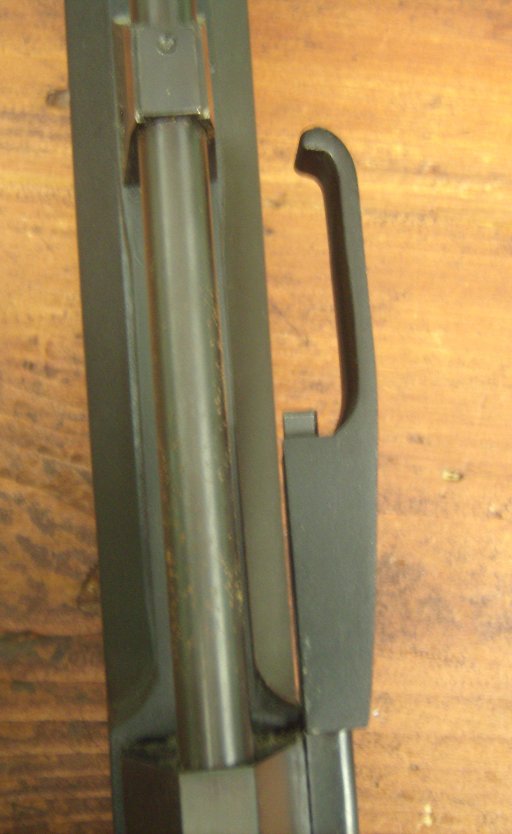 It has a standard globe foresight, but doesn’t come with a diopter, having instead a leaf-type adjustable rearsight. This is easily removed and replaced with a standard diopter rearsight however; the rail is the Anschutz 11mm standard affair. Hence this very incongruous photo of a €100 air rifle wearing a €500 rearsight: 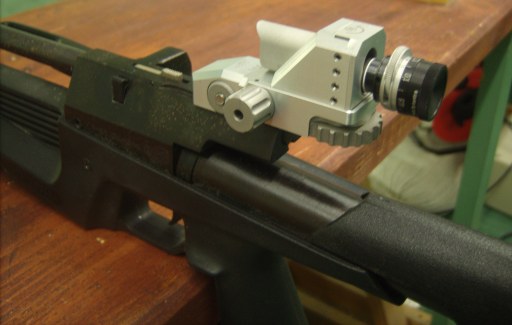 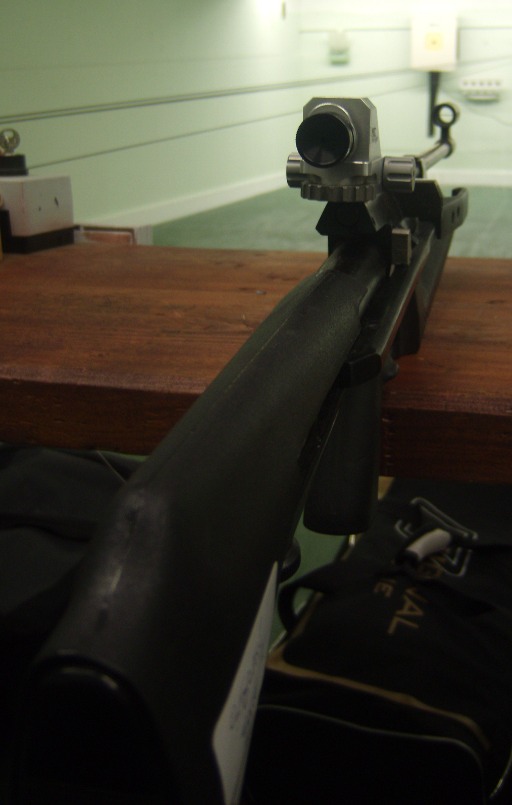 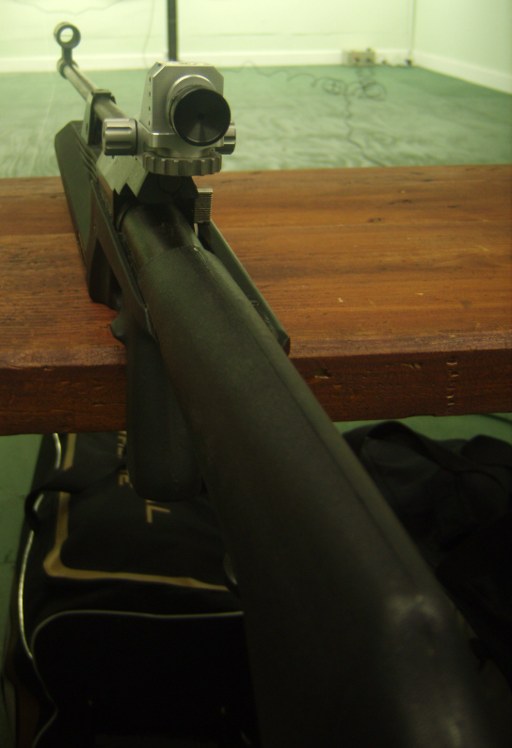 One oddity is that the IZH-61 is a five-shot repeating air rifle (there is a single shot version, the IZH-60, but we didn’t have it to hand; it’s identical except for the magazine arrangement). There is a simple plastic magazine to hold the pellets:

Once the pellets are loaded in, the magazine is inserted into the rifle: 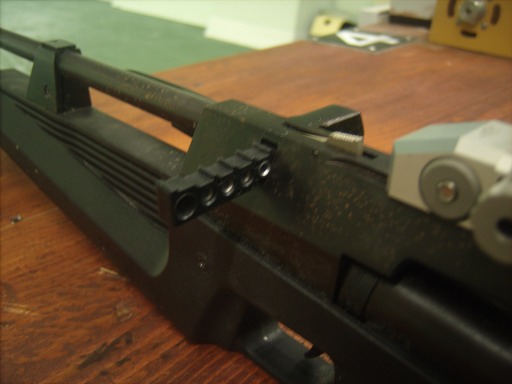 And then pushed home: 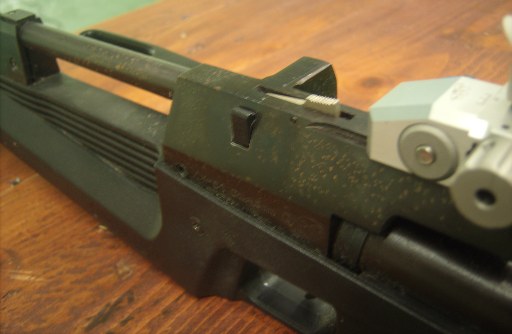 Now, every time the side handle is cranked to compress the spring piston the magazine is advanced to the left a notch; and when the side handle is then returned to its rest position, the bolt probe pushes a new pellet forward and seats it in the barrel:

You can observe the bolt probe (the silver bit) cycling back and forward under the rearsight there: 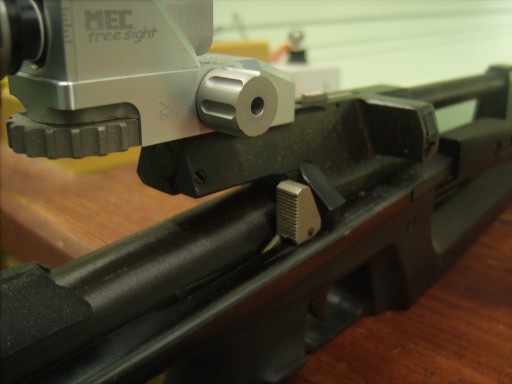 Okay, so that’s a quick walk-around of the rifle. So far, seems promising. Good foresight, easy to fit a rearsight, it’s very light so good for juniors, it’s basicly adjustable, it’d pass the ISSF equipment rules at a pinch, and it’s quite inexpensive (this one is on the secondhand market for €100 at the moment). So all that’s left is the key requirement of accuracy, so I tried five rounds from the shoulder:

Not the best group (they’re all high because I didn’t adjust the rearsight); and it has the traditional spring piston habit of trying to give you a dose of scope eye, though not as badly as the FWB300 series used to. I did fire another five from a sandbag just to be sure it wasn’t me: 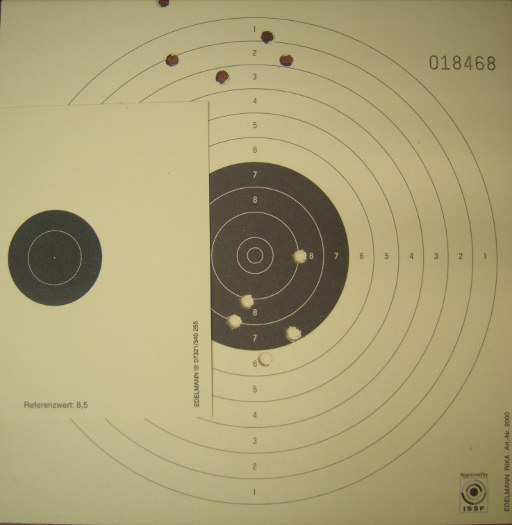 Sadly just not that great. As you can see, it’s not even guaranteed to hold the aiming mark for a rifle target. If someone was just starting out, it might suit, but it wouldn’t be a great idea after that point. For plinking at knock-down targets yes; but for paper targets in competition, not so much. However, I should point out that others with brand new IZH-61’s have reported groups that were as small as 10mm edge-to-edge after picking out suitable air pellets. 10mm is about the absolute maximum group size you could accept for a beginner; a proper match rifle will have an edge-edge group size of no more than 5mm. So perhaps with a new IZH-60, without any inaccuracies from the magazine system, and with some pellet selection, we could have a candidate here for a €100 entry point to ISSF air rifle. Investigations to continue…