A quick check today with all the kit on again to evaluate performance after the last few days of training. Showed up to find that Laura’d been training before me: 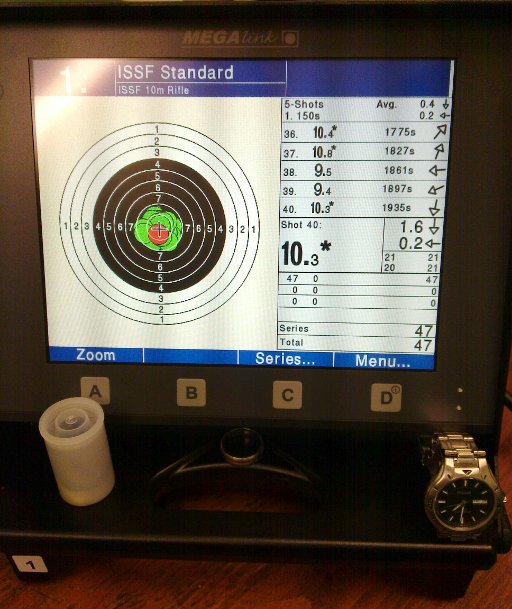 Anyway, into the underarmour (was this stuff specially designed to make me look ridiculous?) and then into the suit, which is still not fitting properly at all; but it’s becoming obvious that that’s not just a belly problem, it’s too tight across the chest and in other dimensions. I got it back in 2001 when I was 25; it’s nearly a decade old, I suppose I shouldn’t be surprised it’s not fit for purpose anymore. Once the gymwork takes effect and the weight abates a bit, it’s time for a new suit I think.

But for now, it was into the existing suit, warm up a bit and then put a few rounds downrange. I had to undo the bottom two buttons and the top button to stop the suit fighting me out of position, but it seemed to work:

It’s not bad, except for the two fliers to the left (the sights were off to the right here, but I was watching the group size, not the score). But as Matt watched me shoot, he could see I was still using muscle to hold on the target (hence the fliers). I just couldn’t tell through the jacket. I spent the next while working on that, without much success (the sights are adjusted correctly here): 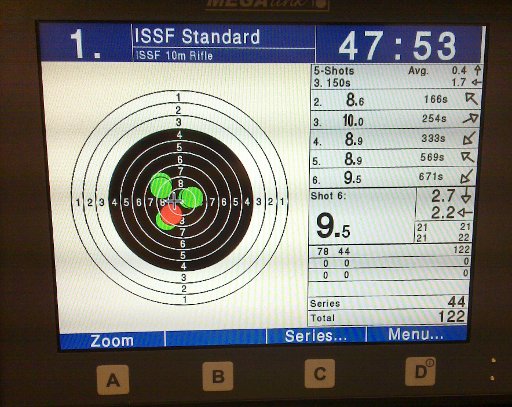 At this point, I gave up. Too tired, too much effort to fight the jacket, and too little results, so I called it a day and I’ll come at it again another day.