Last night was originally going to be for endurance training. The idea was simple enough – dryfire to get set into position, then fire a hundred shots (basicly  just empty the shakerbox of pellets). Do this on a tuesday and there’s time to recover before the match this sunday.

In the end though, it didn’t quite work out that way. There was still a test of endurance (I think I was in position for an hour and 45 minutes before taking a quick break to stretch, and in total I was on the line shooting for a little over two hours), and today everything hurts, as you’d expect, but Matt noticed that I was still having issues with the trigger, and so we tried addressing that instead. 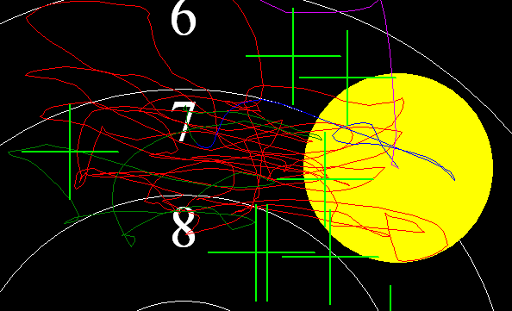 As you can see, the triggering (the blue line) dives right out of the hold area and the shot lands away from where we were holding the rifle. Not good.

The original trigger setup was right back in towards the pistol grip – to the point where I had to dremel out a cutout on the pistol grip to allow the trigger to be pulled at all:

Matt now moved that trigger far forward, and altered the angle it was set at. After some experimentation and a lot of shooting, this is the new trigger setup:

And yes, that trigger angle is deeply unorthodox. However, because of the cant I hold the rifle at and the natural angle my hand is at and the angle my index finger is at to the hand when it’s curled, that setup works to give a solid contact point for the finger and a clean trigger release.

Shots are getting hinky there at the very end, but otherwise, not a bad result for two hours of work. Next time will be dry-firing and then more dry-firing and more hold-with-periheperal-vision training.

It works quite well, and it’s a definite improvement on the earlier blinders, but its not quite perfect yet. Need to get some sort of adhesive tape that allows a lot of light through, but not much in the way of an image. Still, that’ll do for the match on sunday if I don’t make a better one before then…

2 thoughts on “Endurance, a new blinder, and trigger changes”