So this morning was the second of three qualifying matches for Intershoot 2010 (the third is now confirmed for January 3 as I understand it). And for me, it was a particularly fustrating disaster. Again. 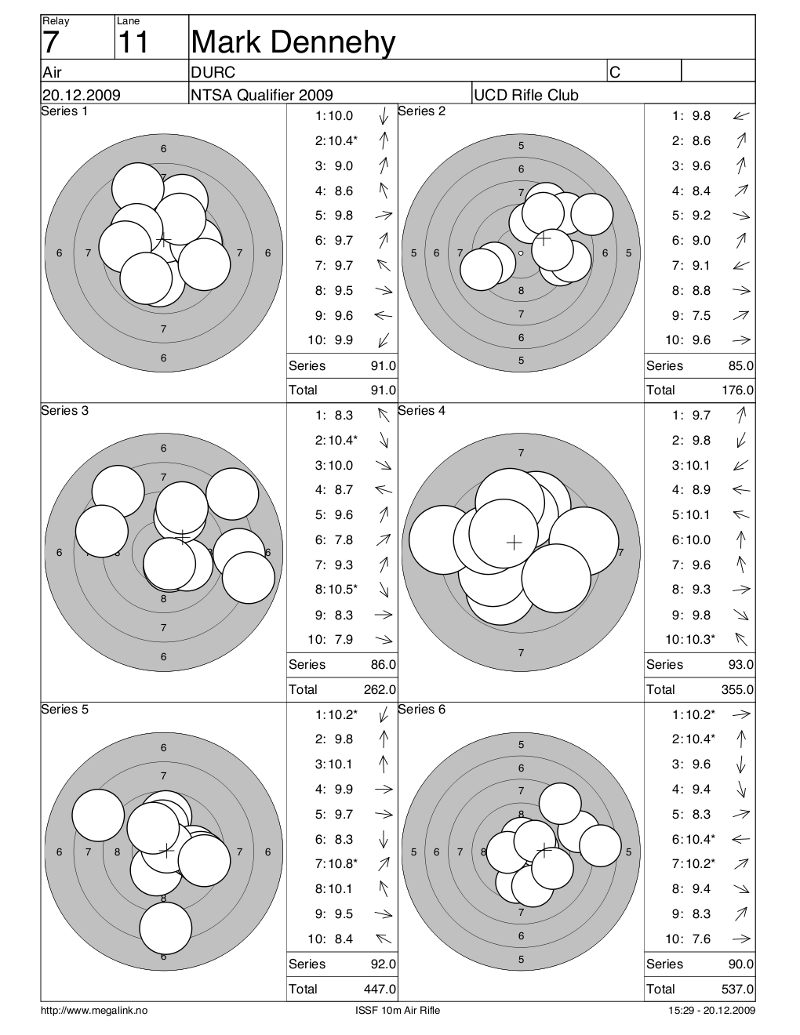 The timing wasn’t as large a problem today. Got to the range in time, and was up and running in time. I did run into time issues during the first 20 shots, but it was because of the larger problem, rather than being an issue in itself (I finished the match with about two seconds left on the clock, hence the awful flyers in the otherwise tightish groups on the last strings).

Whatever the problem was, I couldn’t lock it down. The position was good – it felt just like it did in practice, it was nice and stable, I didn’t feel like I was letting my back sag or collapse, and I caught one or two poor setups and aborted when I spotted them, so that seemed fine. And the hold seemed fine as well – I was getting a good two to three seconds of stable hold, with the target just sitting there as if it was prone shooting.

And triggering felt fine too – not perfect, I just changed the trigger blade to the MEC and I expected it to feel different and unfamiliar, and it did – and I should probably see about adjusting the trigger weight slightly, it’s become more difficult to feel the break at the moment – but it wasn’t a problem.

I think whatever it was was back to something in the sight alignment. Getting the foresight centered in the rearsight was proving hard, and at times it did feel like I wasn’t getting my head position right at all. And it’s about all that I can think of that would explain the randomness in where the shot landed compared to everything else. Unless, of course, it’s my actual eyes. I really must schedule an eye exam to be sure.

It didn’t help that I showed up all ready to record the whole match on video for post-match analysis only to find that both cameras had flat batteries. Gah. Another item for the day-before checklist…

There will have to be a trip to WTSC tomorrow night to do some work on this. And the camcorder and camera are both charging as I type. Then down to KK for the xmas hols, with the rifle for some dry-firing, and back out to WTSC for more training when we get back up before the Jan 3 final qualifying match.

It’s very fustrating – I can see the hold and position are better, I know I’m shooting better than I have been for years, but I just can’t aim the damn rifle because of something to do with the line of sight. Argh!