Day three started better than day two in terms of aches and pains. No panadol needed for ‘muscular aches/pain’ this morning, and no headache from dehydration either – for which we had blue powerade to thank. We were chugging that stuff like there were no side effects 😀 Breakfast was the usual bread, cheese, ham and frankfurters (protein, protein, protein), apple juice and coffee that was the staple for the week.

Then off to the range and this morning Kimmo had me working on trigger control, or more specifically, taking the shot faster. Everyone who’s ever coached me is now thinking “yeah, right, good luck with that…” because if I have one problem apart from hold, it’s over-holding on the target. “Take the f*&@@$#! shot Mark” has been a refrain of Geoff’s now for some time…

I won’t say Kimmo succeeded. I will say that during the camp he was able to point out actual figures using the Noptel machine that quantified what we all knew – I’m too damn slow on that trigger. Average human reaction time is 0.2 seconds, so you can’t reduce your delay much below that amount; mine is currently at 0.44, over twice that. So I have much work to do here. On the noptel, it was somewhat easier, so maybe I should put in some Rika time back home – but the temptation to play with the damn thing is high, or to ignore the actual impact point and watch the hold statistics. 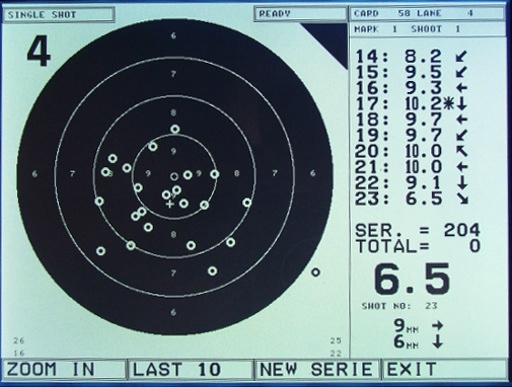 After two hours of this, I was in some pain – the muscles that had been nice and quiet before breakfast were now getting quite shouty. So the break for lunch was very welcome, and after lunch I took a page from everyone else’s books and crashed into bed back in the room for an hour before heading back to the range a bit more refreshed.

Back on range it was time for more trigger control exercises. I went through about 80 live shots and I lost count of the dry-firing ones. I thought I was getting good results, including one particular 10.6 which was the best shot of the camp to date – deliberate hold, saw the ten, took it positively instead of waiting for it to come to me and the trigger to somehow go off magically. 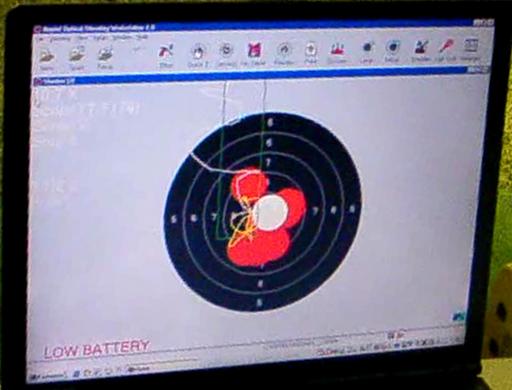 After the training, the inevitable finally happened and we took out a few golf clubs and knocked a few golf balls down the range. This year I was far, far better than I was last year. Last year, I only managed to slice through 90 degrees and hit the wall facing me instead of the one we were aiming at: this time I managed to get the ball to go through 180 degrees and hit the *back* wall.

After that, we went back to the hotel’s gym in order to do some work with swiss balls (and yes, we made all those jokes too). I will say this much – for a giant inflatable ball, they make for a great bit of gym kit for core work. I’m quite impressed (and sore). The balance element they bring is good too – I was being pushed hard to maintain my balance while kneeling on it and only Neil Stirton was able to stand on them.

Once the gym work was done, it was back off to hydrotherapy. This time around Kimmo decided to show us the Finnish way to do things and demonstrated the plunge pool. Allow me to explain, for those who’ve not done this. The idea is, you go to Finland in late Autumn/early Winter, when the average temperature is between 5C and -30C, you change into swimming trunks and you get into the normal hydrotherapy pool, which is about 5’6″ or so of comfortably warm water, and after a moment or two, you get out, walk up to this smaller pool (about 3′ by 5′ by 4′ deep) that’s filled with ice-cold water, and you get in. And immerse yourself fully. And stay there for up to two or three minutes. After which, you get back in the hot water. And you do this repeatedly.

And the really insane part? It feels good. Well, not the first time you get in, that’s a bit of a shock to the system. I think I lasted 30 seconds before legging it to the warm water again. But after that initial shock, it’s a very remarkable feeling. All the capillaries in your skin have shut down and then start to reopen in the warm water, so you get a feeling akin to pins and needles, but different and not as intense and not painful. It’s like a deep tingling all over and it’s quite pleasant, you find yourself grinning like an eejit. It’s disconcerting in that the cold water does stick to you when you get back in the pool so your skin does eventually say “I give up, I don’t know what the hell you’re doing to me” and starts feeding nonsense signals to your brain so you don’t know if you’re in hot or cold water anymore. All in all we were back into the pool three or four times tonight. And after that, the obvious thing to do is spend a few minutes in the jacuzzi and then hit the steam room.

By the way, the steam rooms in the gyms back home in Ireland? Pale imitation. The steam in these were so thick you caouldn’t see clearly across the room. And it really heats you up after the plunge pool, and forget dehydration, this thing gets more moisture into you than a danish chicken breast water injector. Your skin feels better, you feel warmer, you feel utterly hydrated, and completely decongested to boot. Wonderful stuff. You can see why the Finns make such a big deal about steam rooms and saunas.

Dinner after that was a bit of an anticlimax really. Chicken with rice and salad and some nice bread and a yoghurt&pineapple dessert. Nothing terribly fancy. Then back to the rooms, write up the diary and the notes for the blog for the day, skype home, watch a little tv and hit the hay. Well, almost. We did try to do a load of laundry tonight.