Travel from Helsinki to Kuortane was calm and peaceful by comparison to the flight to Helsinki. A nice fast train ride (~160kmh) north to Seinajoki (the tango capital of Finland apparently) and then a taxi ride west to Kuortane. We arrived around half five or so, two hours after sunset, and dropped the gear to the rooms, had dinner and then fell into bed.

The next morning we were a few minutes late to breakfast (still not adjusted to the two hour time difference). Ham, cheese, bread and pickles with water and coffee. Definitely not a greasy fry-up 😀 Then up to the lecture hall for a brief introductory talk by Kimmo Yli-Jaskari, the head coach for the coures (and the head coach for British Shooting as well as a few other things, including an international level Golf coach. Sports is seen as a real career over here instead of being the eternal PE teacher it is back home). The talk was the same as at the last course, with some small extra data thrown in, but basicly went over the three components of shooting (hold, aim, trigger for those wondering) and then how those are statistically analysed and how various shooters show up in the statistics. You can pretty much predict an air rifle shooter’s score from their hold statistics as measured by Noptel (or RIKA or SCATT), for example. There was also a section on training plans and a sample one given out by Kimmo that he uses for training.

Then it was over to the range. 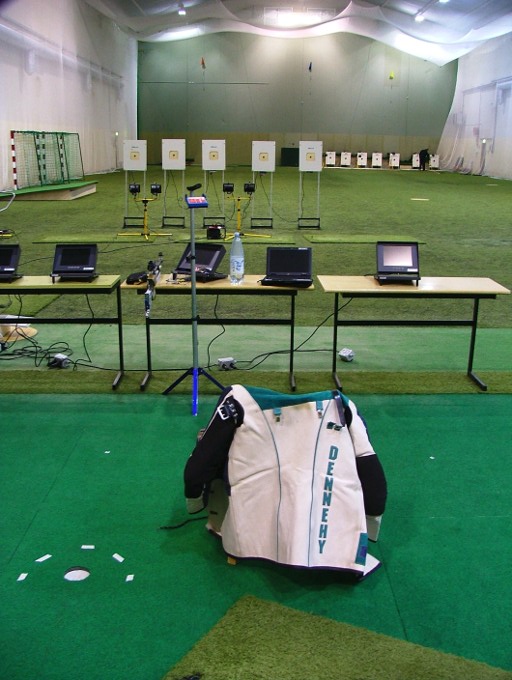 We’re in the golf hall again as you can see, using megalinks at 10m and 50m. Today I was the only person shooting air, all the others were shooting 50m prone. 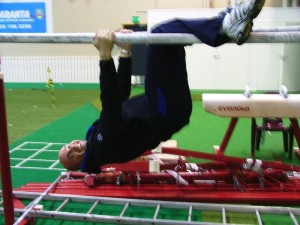 When they weren’t monkeying about at the start, that is 😀 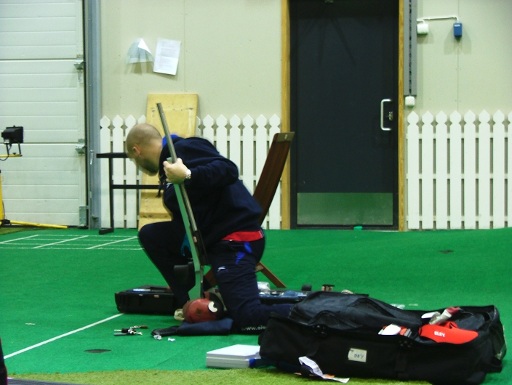 Fun and games over, we got down to shooting and by 1000h, we were well underway and I was dry-firing my way though Kimmo’s MDC (Maintainance-Development-Competition) training programme exercises. For the amount of rust on me, the hold felt surprisingly good, the position robust, and so long as I didn’t look at the performances of any of the others there, I felt rather good about my shooting. Of course, that didn’t last. All morning was dry-firing, then lunch (rice, steamed beef stew – don’t ask, and yoghurt for dessert), and then back to the range. At which point I started to put lead downrange (and two other shooters started shooting air rifle so I’d feel even more discouraged by their constant tens 😀 ).

I couldn’t group at all. It took a shot or two to figure it out – it was the same problem I’d had at Bisley every time I’ve shot there. Brightly lit target, dark background: 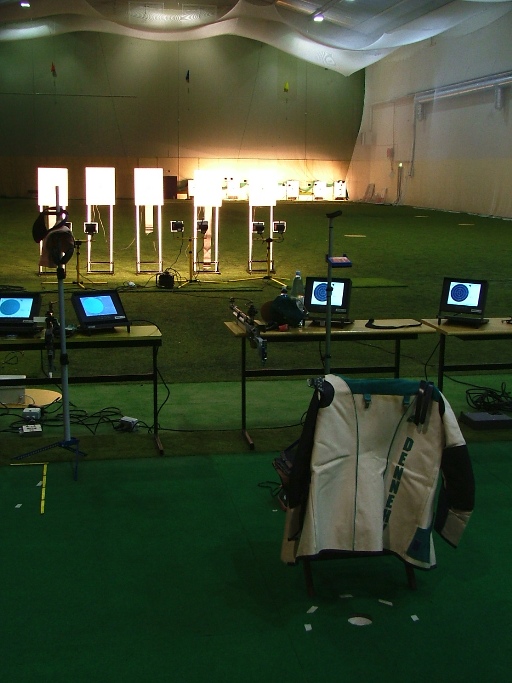 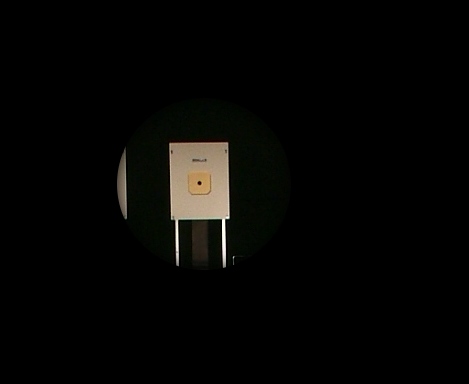 Can you see the edge of the outer black circle clearly?

After talking with Kimmo and Jozef about this, we tried a few things (half a dozen colour filters, rear iris wide open through to shut tight, with and without my shooting glasses, and with and without the mirror I normally use on the rear iris), with no decent results. A lot of fustration and shots ranging from 9s to 5s later (and one of those fives hit just before a floodlight failed and I couldn’t help saying “Oh come on, it wasn’t that bad!”, which has lead to a bit of joshing over dinner about how I shot out the lights – which I didn’t! 😀 ), and we weren’t too much closer to a solution. We eventually gave up for the afternoon’s shooting, with notes for myself to get an eye exam for both a general prescription update and a contrast sensitivity test when I got home.

There was some work on the rifle itself though; Jozef pointed out how the Anschutz 2002CA stock has a flaw – the buttplate, viewed from above, is not aligned with the boreline correctly, it’s a centimetre or so off to the right, pushing the rifle into you if you’re a right-handed shooter.

This puts pressure on my position, so he wanted to move the MEC buttplate left to compensate; but the MEC buttplate it seems can’t do that (there’s only a horizontal slot for adjustment of position at the top of the buttplate, not the bottom, so it can rotate but not translate — which, by the way MEC, is forbidden under the ISSF rules, 7.4.2.1 (pg.289)!So a new buttplate needs to be bought when I get home.

Another reason to buy a new buttplate is that while talking to Jozef about this, the rifle fell off the table while we were both distracted, it landed on the bottom tip of the buttplate and knocked it flat – and I didn’t realise it until later, but that sheared off a locking pin on the buttplate, which means the bottom heel of the plate can’t be properly adjusted anymore. So DURC get an equipment donation and I try to find a buttplate that can be adjusted according to ISSF rule 7.4.2.1 properly.

After the afternoon’s shooting, we stashed the kit and hit the main hall for an hour of physical training, mostly an hour of floorball, a sort of finnish indoor hockey thing with lots of rules about high sticking and handball and kicking the ball and so on. Pity they had a Corkman on one team and a Kerryman on the other (Kerry won 10-9, in case you have no faith). Next year we’re getting Kimmo a hurley, a sliotar and a bit of video of how hurling is played in an attempt to show why shoulder checking someone into the wall on the far side of the court from the ball is really just how you’re meant to play the game 😀

After that was the steam room (and this was a proper Finnish steamroom here, as in three feet of visibility and temperatures well north of body temperature, not the lame versions we have at home), and then the hydrotherapy pool (picture a pool about 5’6″ deep, filled with warm water, and several pipes dumping more hot water into the pool onto its occupant’s heads, backs and feet (underwater pipes too), all at about 3bar of pressure. It’s like being massaged by warm water and for sore feet it’s unrivalled.

Dinner after that (rice, potatoes, salad, steamed burgers and some odd gloopy chocolate dessert that tasted like chocolate yoghurt with bourneville cocoa stirred in) and then off to bed to get the energy to face day two…