Every so often, you should try something new, even if only for the craic, so this weekend myself and Conor and Dave wandered off to the Midlands range to shoot some fullbore stuff. I brought along the airgun and smallbore kit to show them what our stuff looked like as well. Dave went there directly; myself and Conor met up at DURC to pick up kit and headed in from there. By the time we arrived the match was getting ready to start. This was a vintage service rifle match, so lots of old rifles there from a mosin-nagent to a lot of SMLEs:

We had a choice of shooting either a 6.5 mauser or an SMLE; Dave and Conor took the 6.5 as it was supposedly somewhat less punishing on the shoulder, but great-grand-dad was a sharpshooter in the British Army during WW1 so I wanted to see what the Lee Enfield was like (I know the #4 isn’t the same as the MkIII he’d have used but it’s close enough).

Conor and myself wound up on the first detail, which was somewhat unfortunate as we hadn’t shot much fullbore ourselves (I had shot a .270 once, and a .223 a few times but never without a scope). Two rifles were kindly donated by a boards.ie shooter, and we got a two-minute rundown on the basics of loading and so forth – apart from that it was the same procedure as shooting the sporters from DURC but without the scope.

The buttplate, by the way, on a Lee-Enfield is made of brass, presumably so that the soldier using one can continue to use it even after running out of ammunition. Sobering little detail that, especially when you fire it – both ends of a shot from the SMLE tend to hurt 😀

There are only ten shots in the match, and the top 8 scores count, so you have in effect two sighters. Slightly different from ISSF :D. I put two rounds in the magazine and got into position behind the rifle (the match was shot benchrest style). My first shot went high, into the 3 ring and over to the left by the same amount. The sights were already wound down as far as they’d go, however, so I had to aim off to compensate. Second shot found the centreline, so I reloaded with four rounds and started the match. The first shot of the match clipped the V-bull. By this point I was finding my rythym, but wasn’t in it yet, and I lost one of the next three shots out to the 4-ring. Bother. I reloaded the magazine and went back to it, and when we walked up to the target during the ceasefire at the end, the results weren’t awful:

Dave, of course, hasn’t let two of his slide out like that and cleans up with 40 points, while I’m stuck with 38; but I have three v-bulls to his one. In the end, he takes third and I take fourth, but it doesn’t seem to matter so much as the craic. 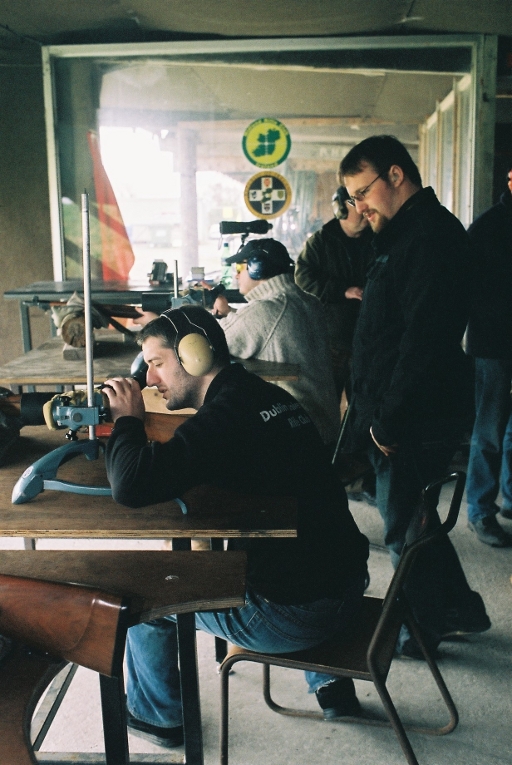 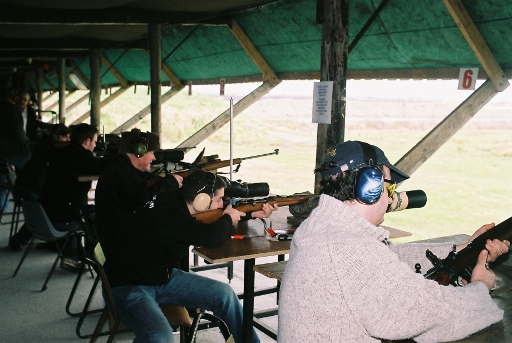 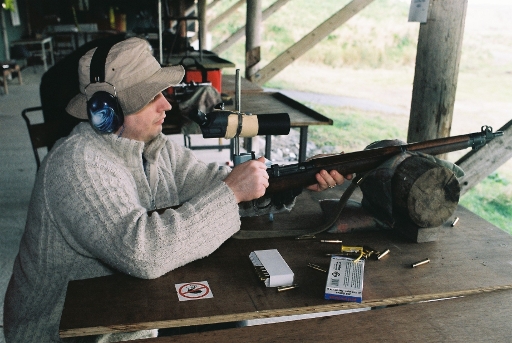 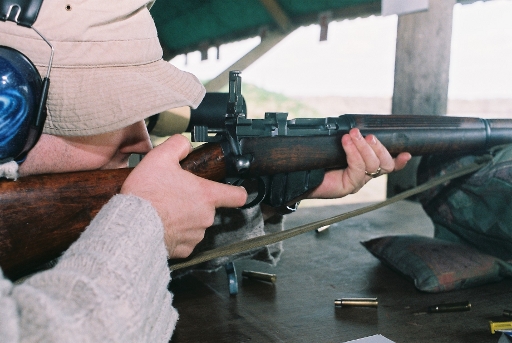 A great day had by all, and well done to Mick and everyone for organising it.

Of course, when in the Midlands, there’s more to shoot than just one thing, but that’s another post 😀