Â Well, the diet progresses, and I’m through the 250lb line in the good direction. 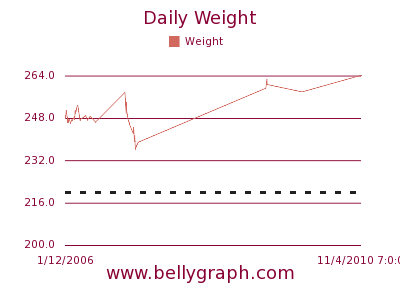 What’s not on that graph was that at one point after New Year’s I weighed in at 264lb. Eugh. The diet started soon afterwards, and so far I’m down just shy of 15lb from that point, so I’m happy enough with it so far. It’s a bit challanging to find more than a small range of meals to eat on Atkins and it’s wholly impossible to not cook for yourself, practically at any rate, so I’m spending more time in the kitchen but also less money, which is welcome. This phase of the diet continues to Jan 31, at which point it eases off a bit, but I don’t see myself coming off it fully for quite a while yet.

On the upside, herself and myself found this weekend that Boots sell those Atkins bar thingies, and I also had time to cook some Atkins coconut macaroons, so we now have something to eat with coffee, which eases the cravings of habit.

The downside is that the diet is doing a good job of supressing hunger – in fact, a nearly complete job. That’s a downside because you don’t notice that your blood sugar level’s dropped because you don’t get hungry, so out of nowhere you start feeling very tired and lethargic and cranky with the world. Not the best thing ever, but it’s astonishing how fast a very small amount of food fixes that. Literally one rasher/macaroon/whatever later, and you’re back to normal.

Not the best thing to do while training for a match though, so I guess it’s a good thing I’m not in training right now!